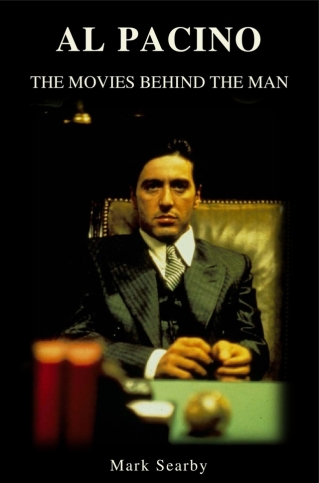 The resident film critic on Anglian Radio Station, and an experienced writer for various outlets, Mark Searby is a man who loves cinema. This is his first book, and he asked me to read this work and share an honest review of it with you.

Al Pacino is a man whose filmography takes in various genres and styles, from gangster films like The Godfather and Scarface, to social stories like Dog Day Afternoon and Serpico, and through to dramas like Glengarry Glen Ross and Frankie and Johnny. Over the course of his career he has demonstrated a power and command of performance, as well as an incredible range. With his piercing eyes and barely supressed energy, he’s a beloved performer and master of his art.

In Mark Searby’s book we take a look at his career via his films. It looks at each film he has worked on to date, in turn, analyzing his performance, the success of the film, and various other elements of each. It also follows these essays with corresponding interviews with people who have worked with him on those films, from other actors and co-stars to directors, producers and writers. There are over fifty of these interviews included.

Searby has a concise and practical way with words, and manages to convey a great deal of detail about each film in his book. I liked the contrast of his assessment of the films with the interviews, from the practical to the personally insightful. This book is very much a film lovers or film studies students book. It functions as a entry into each film, it’s context, it’s critical reception and looks at the evolution of the career of the star, but it’s not a biography. It does not follow the linear narrative of the personal life of the star, but rather looks at the actor through his work. It holds a great deal of detail, and is utterly fascinating, with it’s focus on film.

Perhaps it lacks some words from the man himself, insights into him as a person, which some of you might miss. However, I really enjoyed knowing more about the films, many of which I had not seen before and have now added to my watch list. I liked the slightly more academic look at the films and the career of a fascinating performer with a long career, and I think those of you who love Pacino will want to add this volume to your film library.

Al Pacino: The Movies Behind The Man will be out on June 9, available in e-book or paperback. You can get yours through Amazon UK HERE or Amazon US HERE. You can listen to Mark’s radio show all about movies on Anglian Radio Station Network in the UK.

3 thoughts on “Book Review: Al Pacino- The Movies Behind The Man by Mark Searby”