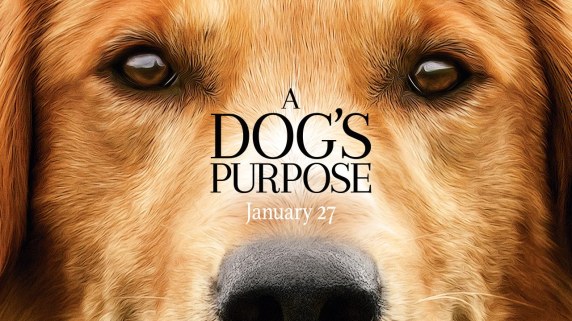 A lot of controversy surrounds this film, because of a video. That video was taken on the set, and caused a reaction from the public and from PETA which caused the film to be pulled from release, and various other things. But the author of the book and the stars were as shocked by the footage as anyone. Why? Because they were on set and never saw anything happen to the animals. In fact, the footage appears to have been cut to show abuse where there wasn’t any, and was also kept from the public and from anyone who could have prevented abuse for a year and a half, until it could be sold just prior to release. It’s all very strange…

The film itself is strange too. It’s a film about a dog who grows up and lives with a boy. When the boy suffers tragedy in his teen years, his life is changed forever, and there’s nothing that the dog can do to help him heal. Then the dog grows old and dies.

But then… the dog is reincarnated over and over, bringing joy to many people, before in one incarnation he smells something. Could it be his chance to change the life of that teenage boy he couldn’t save? A boy who is now a man, broken by life.

Weird, right? It’s about a dog finding his purpose, which is perhaps a metaphor for our own purpose and finding joy in life, and it takes in reincarnation, which means that you have to watch this dog get old and die a few times. Which should have you in bits if you’re a dog person.

But I actually liked this film. I love dogs and animals, and I loved some of the animal humour in this film. It’s a real tear jerker in a way that’s cheesey and for some reason, I enjoyed that. It’s a sweet film. It’s about people and their dogs, and the joy and companionship that that brings. It’s not a great film, to be fair. It’s very sentimental. But it hit the spot with me.

See It If: It’s an animal movie, you know what to expect: tears, animal innocence and cuteness overload. Maybe with all the death, not one for the littlest children?