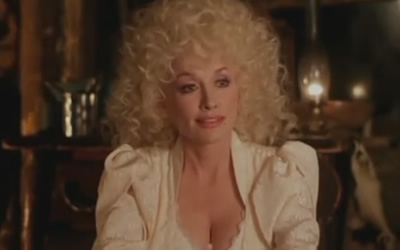 It’s hard to be a diamond in a rhinestone world.

I like to think that I write about a pretty eclectic range of films, from classics to what’s out next. So it perhaps shouldn’t be surprising that I decided to do a month on Dolly Parton’s forays into movies.

Dolly is a fascinating person, with her big hair and amazing figure, she’s a woman who has been incredibly successful, who is determined and kind and smart, but also has done a lot for others, including promoting literacy and education. She’s incredibly smart and funny, but is also all woman. Quotable and uplifting, she’s someone who I find really inspiring.

And she also made some great, and not so great films.

I picked some of my favourites to review and also some that I hadn’t seen before. What appears on the list below are the ones I’ve reviewed and talked about, though she has many film appearances and I just couldn’t watch them all.

What struck me watching these is how good she is in all of them. She knows she’s not a trained actress, so she sticks with characters that she can relate to, and yet she gives some really powerful performances in some of her movies.

I hope that you’ll watch some of these or read the reviews, and I hope you enjoy them. I had a lot of fun watching these.