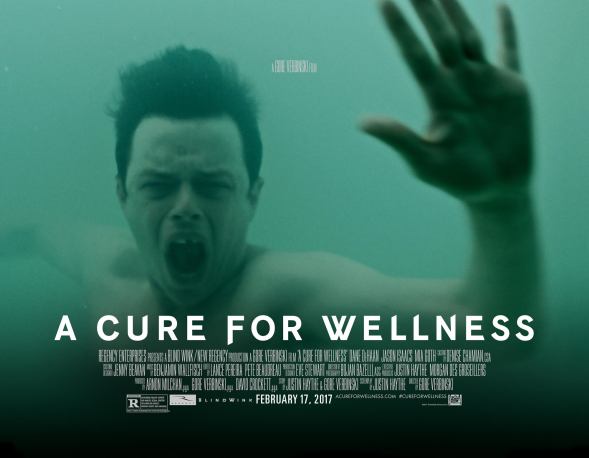 It’s Shutter Island meets Crimson Peak in this psycho-thriller fantasy about a young ambitious banker Lockhart (DeHaan) who is sent to convince his company’s CEO to leave the sanctuary of a spa in the Swiss Alps and return to work in NY. But when he arrives, he starts to get the run around, and things are not at all what they seem…

I had a sense of what this film was about going in, but I avoided the trailers, and I think it’s one of those films that it’s great to just sink into and let it unfold, without knowing too much. The visuals are quite stunning, with everything having an old fashioned, and very creepy feel to it, almost nightmarish. The film floats through it’s 2.5 hour run time, keeping you invested as events unfold a piece at a time. It’s very well paced.

Mia Goth stars as the only young person taking the cure, and she’s delightfully awkward, a grown-up doll, who our young protagonist is drawn to. She’s a favourite case of the head doctor, played with suave aplomb by Jason Isaacs, who is both slimey and charming. This central triangle plays out across the grounds as  Lockhart digs deeper and uncovers more of the puzzle. The spa is like a huge castle, was in fact built on the site of a previous castle with a dubious history, and it looms over the small town below, which appears to be occupied by German punk wannabes. In this sense, there feels like a little homage to those Vincent Price/Hammer Horror classics.

It’s a film that’s highly entertaining, beautiful and grotesque by turns, and relies on creeping dread and dreamlike visuals and mystery to keep you invested, rather than cheap tricks. There are certain elements here that are a little shocking and the film is actually quite scary, so do be aware of that R rating, but the mood of the film stayed with me after the credits, and I have to say I really enjoyed the whole thing.

See It If: you like psychological horror or dark fairytales. I thoroughly enjoyed it.

This film is out in UK cinemas on Friday.