A solid entry, this New Zealand horror is all about the atmosphere and the slow build, as a psychic and two scientists investigate an isolated farm house that the inhabitants have fled, due to it’s being haunted. At first, it all seems inconclusive, but then things start to get weird. What really happened here? Is it really haunted? Based on a local urban legend, this film is an entertaining watch, though not as gory as some may like, and tries to pose some interesting questions. Of course, it contains a nice little stinger in it’s tail too.

Currently not set to have a UK release, so this may not be an easy one for some of you to get a hold of. This film stars Rory Culkin as Jack, a man whose about to become a father, but has to travel home to be with his mother after an accident kills his father. His mother, played by the delightful Lin Shaye, who chews up the scenery in this film, is an eccentric parent who gets weirder as time goes on, and family secrets start to unravel. I didn’t like aspects of this film, which meant that my man and I had one of those post-film arguments, which perhaps tells you what kind of film it is: thought provoking but perhaps flawed. However, it’s quite entertaining, spooky and squeamish, with some really great twists.

Nobody does horror like the Koreans. This one is great, combining enough action and blood splatters to keep spooked, but relying on the unfolding mystery to keep you interested. A cop investigates an outbreak of strange behavior and brutal murders in his small town following the arrival of a stranger, but he is soon fighting for the life of his beloved little daughter when she starts to show symptoms of being infected with the evil. The characters in this film are so small town and innocent, and often the wailing of the title is them crapping themselves over unfolding events that are more strange and bloody than anything they’ve seen before. It’s dark, twisty and bloody, and often very funny, and the ending is really unusual as well. A great one for a cold Winters night. 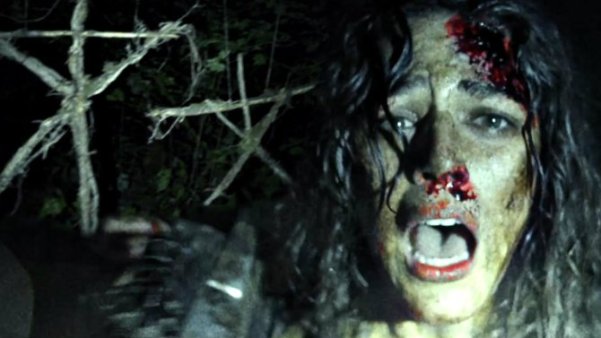 The sequel that no one needed, that turns out to be way better than the original, and way better than you’d expect. In this latest installment, the younger brother of one of the original investigators comes across footage that suggests that his sister is still alive in the woods. Teaming up with his friends, and two local conspiracy theory types, they head off into the woods to see what they can see. And then it all goes pear shaped. Using the original tropes associated with the Blair Witch, the film manages to be “found footage” without being annoying or overly blurry. There are some really delicious jump scares, some nice twists, some gruesome violence, and plenty of tension. And the actors are all pretty good. I enjoyed this way more than I expected to. It’s quite a good horror.

I couldn’t actually bear to put one of the stills of the shots of spiders from this film in the post. Just looking at them was wigging me out! In fact, it’s more of a creepy film than a scary one, with a few jokes thrown in. Jeff Daniels is a Doctor who moves to a small town, and starts to investigate some strange deaths in the neighbourhood, that appear to be from deadly spider bites. But what he doesn’t know is that these spiders are the children of a deadly spider who hitchhiked from South America, and that the mother of them all is breeding in his shed! John Goodman is delightful as an eccentric exterminator who is roped in to the team investigating, and the whole thing is delightfully icky as spiders crawl around close to victims, who sometimes escape and sometimes suffer untimely and painful deaths…