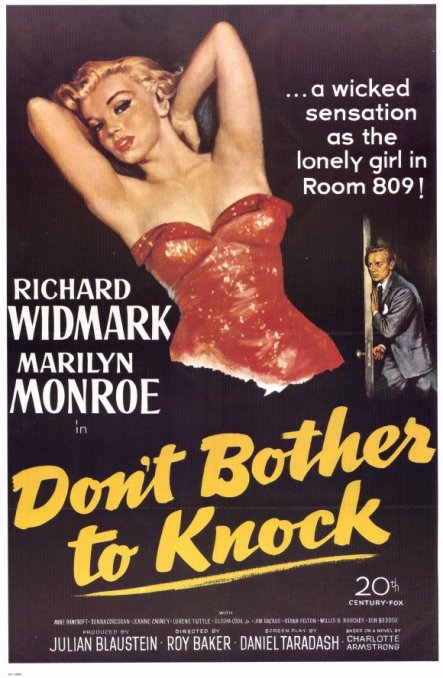 After reading a biography of Monroe recently, I read about this film, made before she was a big star. It interested me because Marilyn plays an unhinged babysitter in a psychological thriller, which is so against type.

Back in the day, Marilyn’s studio knew that she was a popular pin-up, but didn’t think she had a huge future as a star. They didn’t know exactly where to cast her, and this film is a great example of the actress finding her feet. Although it’s not a strong thriller like those Hitchcock was creating, it does have interest.

In a hotel, a couple are offered a babysitting service by a man who works there, his neice who has come to live with him needs the work. Whilst she is alone, another patron of the hotel is drawn to her, seeing her in the window. At first her attempts to seduce him are cute, but soon he realises that there’s something wrong with her, and that the child in her care could be in danger.

Monroe does her best with the material, but it’s clear that she’s not entirely comfortable. Whilst this does add a little to the sense of something being not entirely right about her, it also feels slightly unconvincing. Marilyn had her own troubled childhood, and as an adult loved children, perhaps this is why she’s not completely relaxed into the role. But it’s nice to see her in a different kind of role. It’s an interesting piece of cinema, if a bit hysterical.

See It If: you’re a Monroe fan, this one shows a different side to the famous star.