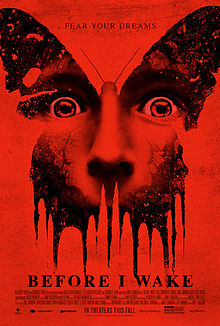 A young couple adopt a boy. Their own young son has died in an accident, and they cannot have more children. But the child they bring home has strange abilities. When he dreams, his dreams come to life. Whilst initially he has beautiful dreams of butterflies, and even of their own deceased son, his nightmares also come to life. And they can kill.

This film was shot way back in 2013 by Oculus director Mike Flanagan, but was sadly pulled from distribution scheduling when Relativity Media went bankrupt. Many people wondered what happened to it, and it must have been very disappointing to the director trying to release his next film and further his career.

And it’s a shame too because it’s a pretty good film. I love the idea that a child’s dreams could come to life, and the scary creature that he has nightmares about could stalk and kill the adults that try to care for him. The special effects are really well done, dark and creepy, and the performances are really good. I felt like the obsession that Kate Bosworths character had with encouraging the child to dream about her son was a bit overdone. I’m tired of the woman losing a child and goes mad motivation, whilst the husband stands by all logical and well adjusted. It feels trite. And no one would put a child in danger the way that she does. But on the whole, the film works, and poses a very interesting premise.

See It If: you’ve ever had night mares… Solid horror with great fantasy elements.