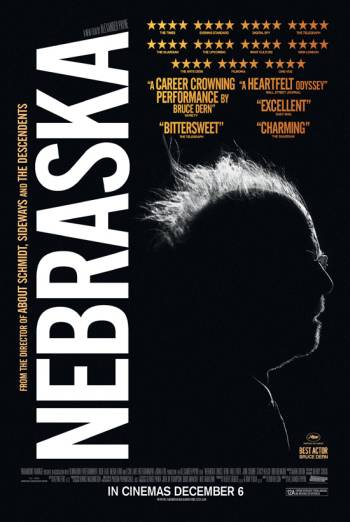 Shot in black and white, this film follows a son indulging his slightly senile father by taking him on a road trip to collect the million dollars he stubbornly believes he won in a magazine sweepstakes. His life and relationship going nowhere, David hopes that time spent with his irascible and alcoholic father Woody will bring them the closeness they never had.

It sounds like the template for a bonding film, but it’s actually something quite different, and will stay with you for days after watching it. The film is more about the dullness of family, the dying face of middle America, the empty landscape, and the way that people change when they think there’s money or something they feel they’re owed. There is some understanding that David gains but there’s also things he probably wishes he didn’t know (his mother gives some hilarious and nasty home truths).

The film is funny, bittersweet, sad, but it’s not easily categorised in some ways. A lot of the people in the film are not nice, even as you come to understand the choices they made. And a lot of the bonding or nostalgia that David would like to evoke is just not in his parents to offer him. It’s a very interesting and multifaceted film in that respect, and has a remarkably different tone than most films.

Why Is It A Must See? It’s not a classic road movie and it’s not a heart warming family movie. At times, it is laugh out loud funny. Sometimes it feels like no one is a nice person, other times like people need to be forgiven for the past. Sometimes it’s sad. It’s a clever and unusual film.

See It If: You’re looking for something a bit different.