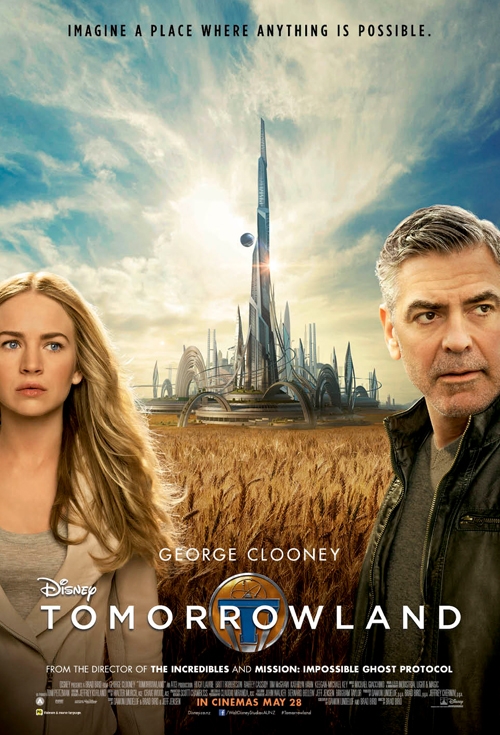 Sci-fi movie created by the guy who dreamed up Finding Nemo and starring the incomparable George Clooney, what could go wrong? Based on a Disney ride, (which before you scoff, you’ll remember the Pirates Of the Carribean films also were) there’s plenty of scope for drama in this franchise launching film that wasn’t. How could something so promising be so bad?

Essentially a string of loosely connected set pieces, which, although shiny and mildly entertaining, exist in essence to lead to the next, rather than furthering the plot in any way. Which makes sense, as the plot is so thin and full of holes you could use it to strain your pasta. The two young actors who play the science loving geek girl and the robot girl who draws her into the future are truly awful. And sadly they get the most screen time. And are thoroughly irritating.

The plot is vaguely about a future world (the Tomorrowland of the title) where people who have such talents as inventing really cool stuff and dressing in clean lines and pastel colours are invited to live. The robot girl is a recruiter form that place who looks for people with potential. Professor Clooney had talent, and a crush on the robot girl when she recruited him as a child. Both have since been ostracized for some McGuffin reason and must return to the future to save the present with the help of science geek girl. Think about that and see if it makes sense at all… The future to save the present… Skip it and watch Back To The Future instead.

See It If: You have a short attention span, like things and explosions or want to see every George Clooney film ever before you die.