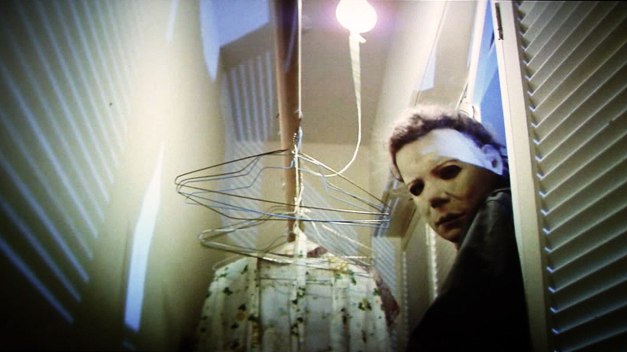 You know I love a horror franchise, and with is being Halloween, I wanted to bring you a special post. Just for you guys, I watched every Halloween film from 1978 til 2018, and you can’t find out all about it here.

Oddly enough, until a few years back, I hadn’t actually seen these films, but they are absolute horror classics and the films that made generations of babysitters shiver. The first film came out in 1978, and was the teen slasher that started them all. Jamie Lee Curtis was the original star, a virginal babysitter who finds her neighborhood terrorised by a masked killer, Michael Myers, who has escaped from an asylum. Cue creative deaths and screaming teens.

1963, Haddonfield, Illinois: a girl is meant to be babysitting her brother, but instead she sneaks upstairs to get naked with her boyfriend. So, her little brother murders her. 15 years later, it’s Halloween night, Michael Myers is an adult now, and manages to escape from the asylum where he’s been held. While he stalks the neighbourhood, and especially a beautiful babysitter Laurie Strode, played by Jamie Lee Curtis, his psychologist tries to figure out his plan and capture him. It’s a slow build for those of us used to modern films which rack up the deaths faster than the tension, so it feels like a thriller more than a straight horror. But it’s a really good entry into the teen horror genre, with laughable deaths and the sense that there’s something unearthly about the killer, who appears to be able to appear at will.

Although filmed a few years later, this film picks up directly from where the previous ended. Our masked killer awakes from injuries that would kill any mortal man, and follows Laurie (That’s Jamie Lee Curtis again) to the hospital where she’s been taken, following the murders. He’s chased by his asylum doctor, who has to convince everyone that the killer is still on the loose. While Michael Myers offs everyone, the truth comes out: Laurie is actually the killers sister, who was adopted out with out her knowledge. He’ll stop at nothing to get to her! It’s a neat little twist and the hospital setting makes for good situational scares and deaths. There’s also the obligatory bad hair and sleazy guy who hits on a nurse who, for some unfathomable reason, isn’t comepletely repulsed, which all adds to the fun.

“Four more days to Halloween, Halloween, Halloween. Four more days til Halloween, Silverrrrr Shamrock.” It’s the jingle that gets stuck in your head for days…. This one is a deperture from others, due to the idea that Halloween movies could be a franchise where each film is about a different murder or supernatural horror that could take place on Halloween. So, no Mike Myers here. Instead you get a doctor investigating a mysterious suicide of one of his patients, with the help of the patient’s attractive daughter. Heading to Silver Shamrocks HQ, where the clues take them, they discover that the owner is using Stonehenge to make masks that will turn kids into killers on Halloween night, activating them with the power of television. Why would anyone want to do this? Because Halloween is the witches holiday of Samhain of course. Duh.

Michael Myers returns! He wakes up on Halloween after 10 years in a coma, and is hell bent on killing his 7 year old neice, amusingly named Jamie. Just because he really doesn’t like his family. Donald Pleasance returns as Dr Loomis, the doctor who is the Michael Myers expert from the first film, who is determined to stop the killing. Meanwhile, little Jamie has been having some premonition nightmares about her uncle, but blithely ignores them and heads out for trick or treating with her sister. Danielle Harris, in her little clown costume for trick or treating, gets extra points for an great performance from a child in a horror film.

It’s one year later, and little Jamie, Danielle Harris again, is now rendered mute by the trauma of her experiences the year before and is in a psych hospital. But Michael doesn’t care. He’s survived the ending of the last film, thanks to a local hermit, and is now ready to stalk Jamie and kill off all her friends. You have to give him points for setting a goal and sticking with it! This time around, Dr Loomis realises that Jamie and Myers have a psychic link they can use to help them stop him, and he’s happy to use Jamie as bait, after Myers kills a bunch of partying teens in a barn in creative ways. It’s a fun slasher in the Michael Myers mould and delivers death and fear, but is also just a little bit dinky too.

Halloween: The Curse Of Michael Myers (1995)

It’s 6 years later, and Haddonfield has not forgotten Michael Myers. And Michael Myers has not forgotten Jamie who has now grown up and has a newborn child. The Shape decides that they’re perfect for this weird thing that he and this mysterious cult want to do. But Jamie isn’t keen to join. This is Donald Pleasant’s last appearance as Dr Loomis, drawn out of retirement, and is actually Paul Rudd’s debut in a starring role. It also goes deeper into the plot of a Druid curse and the Thorn rune as a kind of lore as to the Shape’s immortality, playing with a more supernatural, conspiracy cult vibe that fits with the obsessions of the 90’s. In fact, the film on the whole will give you great 90’s nostalgia though it’s not my favourite in the series.

This film is so so 90’s! But it’s kind of wonderful. Jamie Lee Curtis is back as Laurie, and ignores some of the events of the previous films. It’s 20 years later and Laurie is the head mistress of an exclusive school, and has hidden her past and her identity. But her past and her killer brother haunt her, and make her an over protective parent to Josh Hartnett. He’s joined by Michelle Williams, as his girlfriend, LL Cool J as a security guard, and Curtis own mother makes an appearance, Janet Leigh, as a concerned colleague. When Laurie’s son plans a secret party at the school on Halloween with his friends, she must launch into action to save him and face her past because her evil masked killer brother is back… 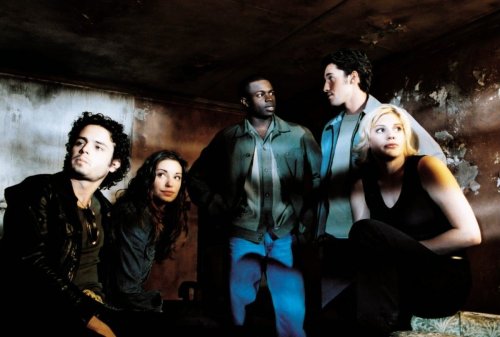 Michael Myers is pissed that a reality TV show is being filmed in his old home, which you can’t really blame him for. But killing the entire crew of the show seems like it’s going a little bit far. Or not, when you come to realise how annoyingly stereotyped they all are. Jamie Lee Curtis is back as Laurie Strode in a small role, and the film has a thoroughly early noughties feel with parts for Busta Rhymes and Tyra Banks. The whole thing is a bit silly and very of it’s era, but in kind of a good way. The franchise is really overblown and overdone by this point that the cheesey premise and characters and dialogue kind of come back around to being hilarious. Not one I’d recomend, but I got a laugh out of watching it and was happy to see the annoying victims get killed off. 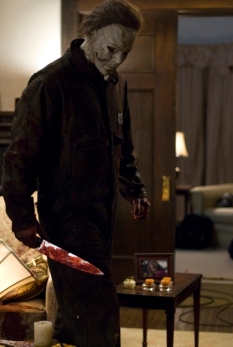 Rob Zombie directs this and the next film, and reboots the franchise. So these ones go back to the beginning. Michael Myers starts by killing his family, and then waiting 17 years before breaking out of a mental institution and heading back to Haddonfield to kill his sister Laurie Strode. While his plan is to kill everyone to be reunited with his sister, she isn’t really keen on his murderous methods. She shoots him in the head instead, but….

The voice of Michael Myers mother wakes him from the dead and he’s more determined than ever to meet up with Laurie, who has been taken to hospital to recover from her wounds. In this film, Laurie and Michael have a psychic link, and at the end of the film, though she kills her brother, she dons the mask and becomes The Shape. Danielle Harris makes an appearance in this film.

Both of these films are pretty dull fare. There’s plenty of attempts at clever camera work, but it generally slows down plot and takes away the impact of the scenes. The the idea of taking the story from suburbia to white trash territory feels like an attempt to make it gritty but it just feels cheap. Characters are at full emotional level at all time, making it all hysterical and removing any emotional impact, which really doesn’t matter because none of the characters make sense anyway. There’s very little tension, and gore is thrown in seemingly at random. They feel like a film student’s fan film about Michael Myers and they don’t really have a slasher vibe or plot at all, they’re more gore porn with sex stuff thrown in, which makes them feel at odds with the rest of the series. 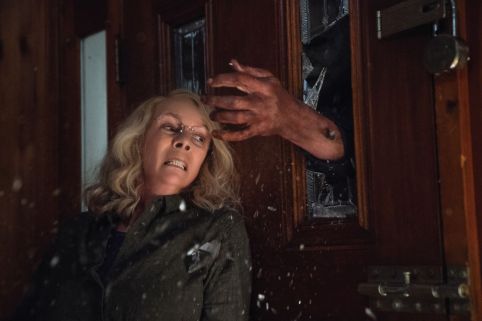 Confusingly named simply “Halloween” but taking place after the events of the very first 1978 film, and discounting the events of the second film…. OK, basically, it’s years later, and Jamie Lee Curtis is back as Laurie Strode, who is now a grandmother and also a shut in. Michael Myers escapes during a transfer from his prison/asylum, and heads back to Haddonfield to get three generations of Strode women. Honestly, this film is pretty lame. And not in a fun way, although I was overjoyed when some British podcasters died early on. Everyone feels so poorly written. The mother daughter relationship sucked. Jamie Lee didn’t get nearly enough screen time and wasn’t half as tough as she should have been. There are some plot lines that seem to go nowhere, like grandaughter Allyson having a cheating boyfriend. It was lazy film making all round.

So there you have it. A long history of prison escapes during tranfers, waking from comas, generations of Strode women all stalked by one man, hilarious and ketchup-y deaths…. and a horroer franchise that’s lasted over 40years! Which one is your favourite?