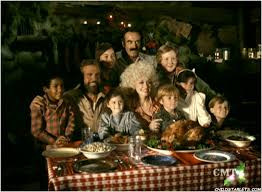 Lorna (Parton) is a country singer who has lost touch with her roots and the things that inspire her, so, since it’s Christmas, she sneaks away from Hollywood and heads to the Smokey Mountains and the place she grew up. On the way, she falls foul of a witch, meets seven orphans living alone in a cabin, and meets a handsome, reclusive mountain man. It’s like she’s stepped into a fairytale, but can she find her fairytale ending, for her and her new friends?

I had heard a lot of people talk about how they love this film and how they watch it every year at Christmas. I didn’t initially realise it was a made for TV movie. As much as it’s a cute watch, I can’t say that I’ll be adding it to my annual Christmas watch list.

The plot is structured as a fairy tale, with Dolly as a kind of princess on a journey, and also a bit of a Christmas angel archetype. Dolly is her lovely warm self, and has a lot of fun with the material, even when it’s pretty cheesey and a little weird. Her hair is at it’s biggest and her nails at their longest, with some great costumes to boot. She also busts out some pretty sweet music.

It does all feel a little too “TV special” sometimes, but the child actors aren’t too bad, and since it’s all a fairytale, you can kind of go with it all. I love the weirdness of it. A country singer with massive hair, orphans, wicked witches and Christmas songs, it’s all so big and all so 80’s. And why not? It’s all sweet enough to give you a toothache, but I can see why people who saw it when they grew up would love the cotton candy fantasy of it all.

And of course, Dolly is always a treasure.

See It If: you’ve ever gotten on the wrong side of a local witch, while trying to avoid the paparazzi and take care of seven orphans and have the best hair volume of your life. lol. It’s a Dolly Christmas special from the 80’s and it’s about what you’d expect.