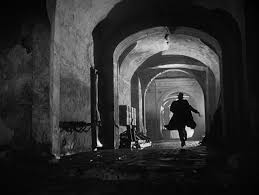 Penned by Graham Greene, The Third Man is the story of a fiction writer (Cotton) who heads to Postwar Vienna to work with an old friend. But when he arrives, Harry Lime (Welles) is dead, and under very suspicious circumstances. As he starts to find inconsistencies in people’s stories, he finds himself drawn into a web of lies and deceit.

Shot on location, this film has a vibrant realism to it that draws you in along with our hero. In black and white, and using light and shadow beautifully, the film has some truly beautiful and sinister camera work.

Considered the peak of Carol Reed’s career, it’s a film in some ways overshadowed by Welles. As you can see on the poster, he looms large over the narrative, but has only a little screen time. he just manages to use it so effectively that he steals the show, just as Harry Lime’s character should.

But once you get past that, Cotton is a wonderful lead. He feels rounded and well realized, convincing as a man who makes ends meet by writing cheap Westerns, which doesn’t impress the locals in Vienna. He seems vulnerable, the butt of the joke, and yet he’s also smart enough to figure things out, slowly. Also, Alida Valli is gorgeous as Harry Lime’s sometime girlfriend and love interest in the story. (Those cheekbones!) She manages to be just aloof enough that you know there’s fire underneath.

It’s a film that you might go into knowing the twist in the ending, but that doesn’t really detract from the film’s story at all. There are so many twists and turns, and such beautiful light and dark playing over cobbled and battered Vienna that on the whole, it’s a delight.

See It If: a must for Orson Welles fans, of course, though he has limited screen time in the film. It’s a first class thriller with a beautiful dame and double crosses galore.