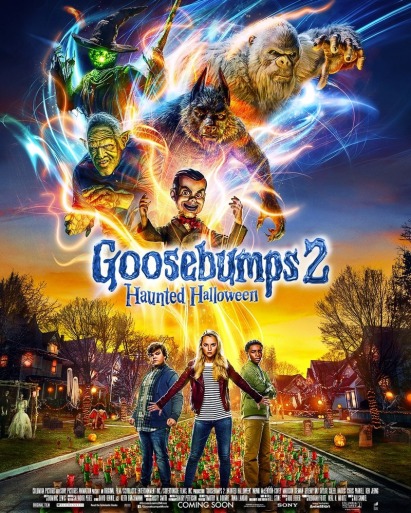 Just in time for Halloween, the film adaptation based on RL Stine’s classic book series Goosebumps returns for a sequel. Set at Halloween, the film follows two best friends who uncover a strange ventriloquists dummy hidden in an abandoned house. As all hell starts to break loose, Slappy, the creppy dummy from the book series, comes to life and brings all the classic horror and Goosebumps tropes with him. Can the two best friends, with the help of their teen sister, stop Slappy and save their home town?

As a fan of the hilariously camp TV series of Goosebumps, and as a child who grew up reading these books, I felt like the first film would be fun, but didn’t expect it to be as amusing and sweet as it was. (Review HERE)

Sadly, there’s something about this second film that falls flat in the middle. Slappy is one of the creepier characters from the Goosebumps series, and his eery features and hysterical laugh are well realised. He makes a camp and spooky villain, and an excellent antaogonist for this film. But somehow, something is lacking. In the first film, the child performers really shined and were given plenty of great one liners and comedy gold situations. Here we are given three kids who just dont get given the snappy dialogue to work with. It’s just not as funny and not as much of a ride somehow.

When Ken Jeong as the overly enthusiastic neighbour is on screen, he is really delightful and the film takes off, but you can’t help but wish for more of him. We are also teased that Jack Black as RL Stine will be along any minute, but he never arrives, leading to a sense of disappointment. He was great fun in the first film.

It’s not that it’s a bad film, it’s really not. It’s pretty fun and has some sweet moments, and the effects are really well done and not over used. I really liked the way the film looked and the world it created, ordinary suburban lives over run by monsters. It works well. But it was just less fun and less funny that the first installment. It should be a great film for kids and those who want the nostaligia trip, and there’s nothing wrong with that, but the first film created high expectations that it only partially meets.

See It If: you’re a nostaligic RL Stine/Goosebumps fan or you need something fun to entertain the kids, it’s fun, but it lacks the charm and wit of the first film.