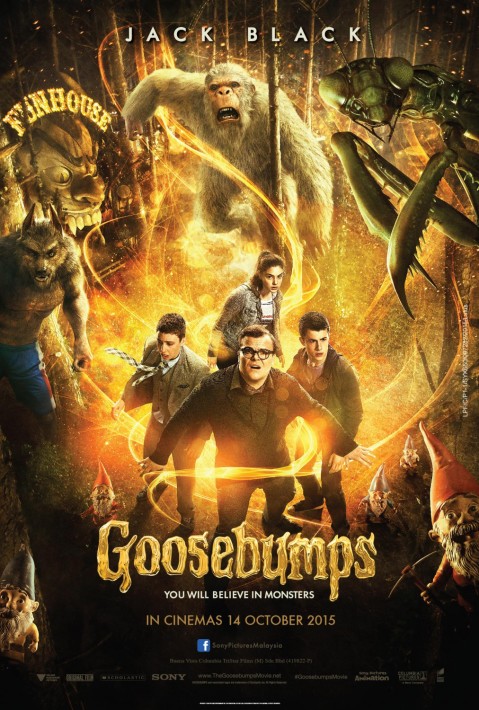 When two teens unwittingly unleash the monsters from reclusive R L Stine’s famous book they must team up with the reclusive writer and his daughter to return them to their books and save the town.

This might seem like an odd movie for me to review, but here’s the thing: sometimes my gorgeous boyfriend and I have been known to watch the Goosebumps TV series from the 90’s when we want to be doubled up in laughter, and I have a feeling that the creators of this film did the same.

And before you judge, Ryan Goslings first role was in an episode of Goosebumps. (Find it on YouTube, it’s hilarious!)

Jack Black plays R L Stine, a man whose imagination is so wild that the creatures he has dreamed up are real, and are only held in the manuscripts of his books by locks. When a new kid moves in next door, Zach (Dylan Minette) soon finds himself befriending Hannah (Odeya Rush) the mysterious daughter of the author and Champ, (Ryan Lee) the most awkward kid in his year. Of course, all the monsters get out and start terrorising the town, eventually converging on the high school, and of course, life lessons about grieving and letting go, learning to fit in and being yourself are all learned, but the film is more than that. It’s incredible performances from the young leads, hilarious situations and dialogue, and a sweet aunt who likes to bedazzle things, the feelings of a first crush… it’s a very heart felt, sweet film, and it’s very clever. I think it will please more than just it’s target audience.

See It If: You want a sweet and hilarious nostalgia trip, are looking for something fun to watch, or have kids who might get a kick out of it.