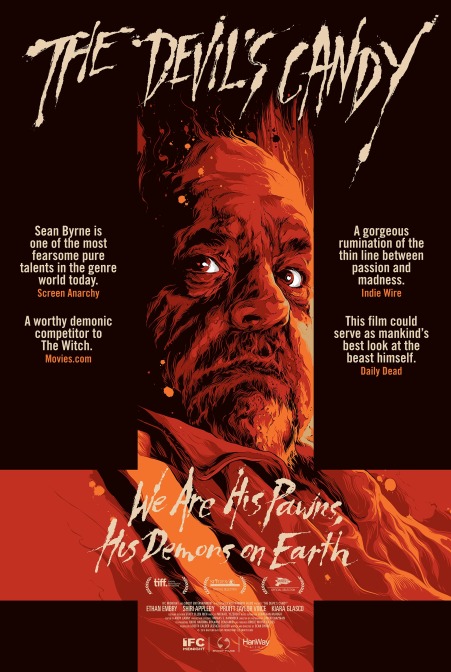 Low on funds, a family move into a house in Texas that’s selling cheap, because of it’s creepy past. Soon, the father of the family, a painter, finds himself acting under a strange influence…

And that’s where the film departs from the classic haunted house plotting. This horror from Australian director Sean Byrne is his second feature and shows a grasp on the genre and a creative subversion of genre conventions. Where you think that the father of the family is going to become possessed and go crazy, especially since he and his family listen to metal music and have tattoos, etc, we find that Ethan Embry’s christ-like looks and loving nature lead us in some different directions.

There is a lot of religious iconography and references in this film, from the bank called Belial, who commissioned a painting from the artist, to Ethan Embry’s crucifix tattoos and crosses on the walls that the previous occupant, and the children who are victims of a truly terrifying Pruitt Taylor Vince. And final scenes of innocence threatened by what’s almost literally the flames of Hell. I kept thinking of verses from Matthew about Christ’s strong association with children in the Bible, and the scenes of the Temptation of Christ, but honestly, I don’t know my Biblical references all that well. I merely point out that those of you who enjoy a possession or religious horror might find greater depths in this film.

Most importantly, it’s a well acted, evenly paced and very creepy horror that works really well and often surprises. I love that it sets you up for a haunted house chiller, and then takes you down a different path, refusing to be obvious and predictable. The performances felt really real and emotive, and the visuals and music made the film feel a bit Gothic, with religious themes and metal sounds, darker colours and Texan landscapes. I’ll be looking out for what Sean Byrne takes on next.

See It If: you like a chilling horror or possession story. Chilling and twisting, this film is great scary entertainment.