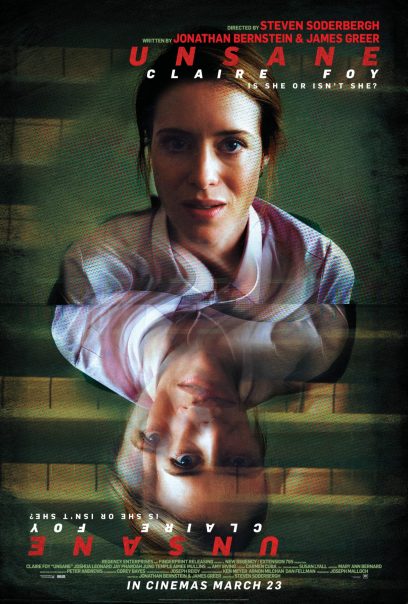 Sawyer (Foy) has moved to a new city and started a new job to try and take her life back after a stalker (Leonard) has left her feeling fearful. But when her fears get the better of her and she tries to talk to someone, she finds herself involuntarily committed to an asylum. Is it all an a scam by the hospital to get her health insurance? Or is there really something wrong with Sawyer? When she starts seeing the face of her stalker everywhere, she begins to question herself.

Shot on an iphone, this film feels a little bit like a gimmick. While Foy and Temple give their typical excellent performances, the iphone limits the way that the film can be shot. It looks fairly cheap, and a little fish eyed the whole time. While this does add a little grit to the film, because of the cheap plotting of the film in the second half, the whole comes off as being a little amateur.

For the first half of the film, we have a strong performance from Foy, who leads us through her life and the way that being stalked as impacted her. But with shots that show that she sees her stalker everywhere, her credibility is undermined, leading us to doubt her. Perhaps she belongs in the facility? It’s a lovely start. Do we believe her? What it real? Added to that, Sawyer has an explosive temper, and she does herself no favours. In a lot of ways, she’s someone that you can feel compassion for but might not really like.

But in the second half of the film, everything gets very unrealistic and hysterical. I don’t want to give away major plot points, but it all gets a bit silly and the whole thing is really far fetched, and hands out an overly neat and conventional ending. It sets out to make us question Sawyer, but then it scraps that plot, and hands us a ridiculous and implausible end.

It’s a film worth seeing to see what can be done on an iPhone, but since iPhones don’t lead to great cinematography and the plot is, well, ridiculous, you might need another motivation to see it.

See It If: you like films set in mental asylums. The performances are good, but the cast are given what becomes rather silly material.