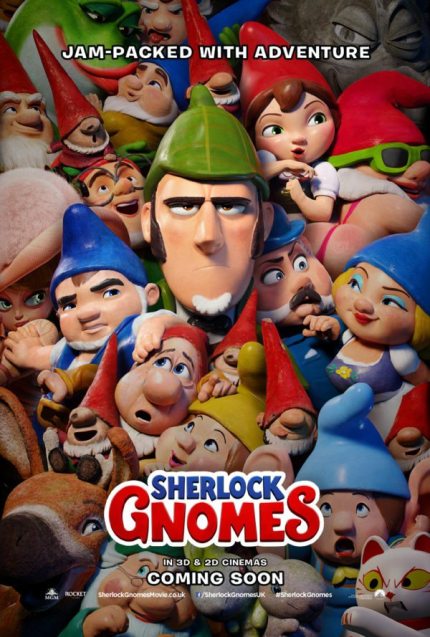 The garden gnomes are back, in this follow up to Gnomeo and Juliet (2011). When their owners move to London, Gnomeo (McAvoy) and Juliet (Blunt) find themselves put in charge of a new garden that needs a lot of work. But when their entire group of friends and family are kidnapped, Sherlock Gnomes (Depp) and his sidekick Watson (Ejiofor) burst onto the scene to save the day.

Laced with loads of tunes from Elton John (David Furnish, his husband, is one of the producers) this film is bright and colorful, and takes the adventurers across the sites of London as they race against time.

The animation in this film is incredibly beautiful, and sometimes looks almost photo real. It’s incredibly evocative of a sense of London, maybe not an entirely realistic sense but it’s a cartoon after all. There’s something very fun about seeing a city you know well on the screen, but sometimes it leads to the film feeling a bit like a postcard or a travelogue, and makes the story feel a little episodic.

Perhaps the other flaw of this film is that a lot of the jokes are a bit flat and don’t quite manage to hit that endearing Dad Joke status they seem to be reaching for.

That’s probably because this is a film that aimed at children, and doesn’t really try to pander to the adult audience that much, unlike a lot of Pixar films or some Disney movies. And children really will enjoy this film. It’s got a lot of action, adventure, different colorful characters, and races around at a fast pace. There’s not a lot that is designed to go over a kids head and the plot is pretty simple. When I was a little kid, I though garden gnomes were magical, and this film appeals to that sense of play and imagination in children. It did make me want to go out and buy a garden gnome.

See It If: a great one to watch with a little one, and will please any of you that liked the first film, Gnomeo and Juliet (though you won’t have to have seen it to enjoy this).