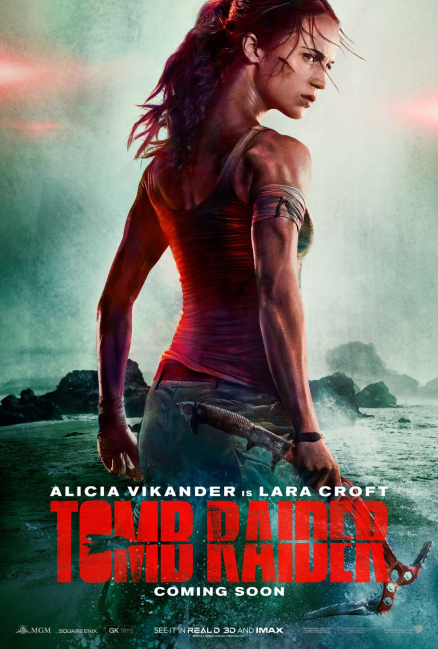 Lara Croft (Vikander) refuses to live off her father’s (West) money and makes her own way in the world after he goes missing on a mysterious mission. But when he has to be declared dead after 7 years, Croft uncovers the location of the island where he was last seen and decides to head there her self to find out what happened to her father.

The great thing about the Tomb Raider franchise for me is the semi-magical elements found in the mysterious locations that Lara goes to, and also the puzzles that she has to solve. In this film, since her dad has already been there, and knows all about the ancient Japanese queen Himiko, all the puzzles are largely solved before she hits the island.

Which is lucky really. Lara in this film is a strange creature. We’re meant to believe that she’s independent because she doesn’t use her families money, and yet she’s struggling to make ends meet in mimimum wage jobs. She’s not a responsible adult. She also has run up a debt at her boxing gym, the owner of which, unlike her, does have to work for a living, and considering his gym is in London, by not paying her way, she’s essentially stealing from a hard working guy. Why bother to make her reluctant to live off her family funds? She comes off as a Hackney dwelling trust fund hipster.

Added to that, she doesn’t wear her iconic short shorts ensemble, which bothered me for some reason. And she cries at the drop of a hat, over everything, she constantly hesitates, and manages to get her bag stolen, which made me cringe. What girl doesn’t keep an eye on her bag while travelling? A girl who lives and works in London? I don’t think so.

The plot is improbable, but not bad. It’s a slow starter, but it’s alright once you get to the island, where the location is interesting and the bad guy is nice and cheesey. But it fails to really get off the ground and get the blood racing. The dialogue is pretty bad, heavily  cliche ridden, but a lot of games have pretty terrible dialogue, so I was willing to go with it, even though it made me roll my eyes a lot.

Honestly, game adaptations are often pretty terrible, so I don’t go into these things expecting much, but Alicia Vikander is an interesting actress, so I was hopeful that it would be a fun ride. And it was kind of fun, but not great. It’s one to watch if you’re a fan of the game, but not one worth paying a lot for a ticket to see.

See It If: you’re a Tomb Raider fan, it’s pretty dull fare all round.