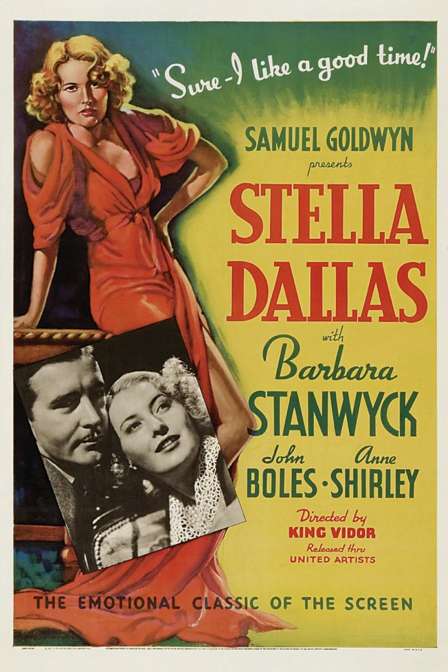 Based on a well known novel that was already made into a silent film in 1925, this version of Stella Dallas is powerful and dramatic without ever being overly sentimental or emotional.

It’s the story of a working class woman (Stanwyck) who marries a man (Boles) with money. Stella wants to make a better life for herself and her husband tries to help her improve. Though they have one child, a daughter (Shirley) that they both love, he’s still in love with his previous girlfriend, and soon tires of his wife’s lack of sophistication. The two split. Though she loves her mother, who she lives with, Laurel starts to feel more comfortable in her father’s world, and soon finds her mother clothes and brashness embarrassing. When Stella realises this, she makes the ultimate sacrifice for her daughters happiness.

It’s a film about the class divide, and in some ways, the situation might not happen now, and yet it still feels very relatable. What I love about the way the story is handled is that no one in this film is the bad guy. Laurel is a good daughter and very attached to her mother. Her father is generous and though he does not live with his wife, he’s never cruel to her and supports her. His old girlfriend is also not a bad person, and does a kind act for Stella that breaks my heart a little when I see it.

But it’s Stella’s film. Stanwyck won the best actress Oscar for her performance in this film, in which she plays a woman who has a light inside her, a bright energy and a loyal heart, even as she ruins her chances for happiness. She loves to go out and be in society, but she has no taste in clothes and is a bit too loud, drinks too much. But she’s there for her daughter, makes her clothes and tries to give her everything. She makes mistakes, and you feel for her not knowing how to act, wanting to be better, and when she makes a final choice, you’ll be in bits. She’s not selfish, not foolish, she’s not jealous, she just can’t make it across that class divide, but she won’t let her choices to stop her daughter from being happy.

It’s a story that could easily be incredibly cheesey or sanctimonious, but it’s a really lovely drama, with heart. And that’s down to the incredible performances of Stanwyck and Shirley. A classic drama for a reason.

See It If: you’ve ever tried to better yourself or made a sacrifice to help someone you love. Beautiful, heartfelt and warm, this will pull on your heart strings.