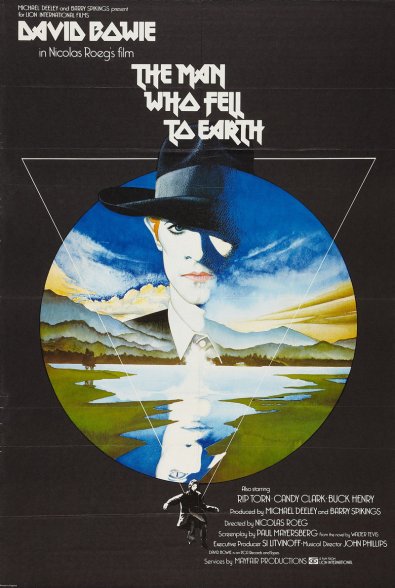 When David Bowie died recently, the huge outpouring of grief was quite a beautiful thing. Imagine touching people’s lives like that, and inspiring so many people? My first experience with Bowie was in his film work, as Jareth the Goblin King in Labyrinth, which has remained one of my favourite movies since childhood. It made me think about his work in cinema, and I thought I had to add a film to my classic movie list from his work as an actor.

I chose this film, which I had been meaning to watch for years, and which I had heard a lot of people talk about.

It’s the story of Thomas Jerome Newton (Bowie), an alien who has come to Earth because his planet needs water. In the process of getting this, he offers various technological inventions which make him a wealthy man. He is joined by a business partner and a maid who becomes his sort of lover/girlfriend (she has an amazing arrays of wigs and haircuts in this film!). However, in his quest, he finds himself addicted to alcohol and television, often watching several sets at once, and the years start to slip away.

Whilst at first, no one knows he’s an alien, eventually his partner knows and he finally tells his girlfriend, and soon the government finds out. He becomes a passive, captive creature, used for his knowledge, and while he wastes his time on Earth, his wife and children and his planet die.

The film is told in a really interesting, non-linear way which makes it a film that has put off a lot of people. It’s weird, surreal, with odd pacing, and Bowie is really very good in this film, his first as an actor. It’s hard in some ways to say what this film is all about. Is it about homesickness? The addictions that have crippled the modern world and kept it from greatness? I don’t really know. But it certainly is an unusual and sometimes just a little unsettling film, and at times, I felt like there was a bit of tongue in cheek humour in it too. I loved the 70’s feel, the experimental and extra terrestrial feel to it all, even though it felt very long at the same time.

It’s quite a feat of film making, even if I’m not entirely sure that I “got”it.

See It If: you like art house, experimental films or are a Bowie fan, it’s a bit inaccessible and long for most people, I think.