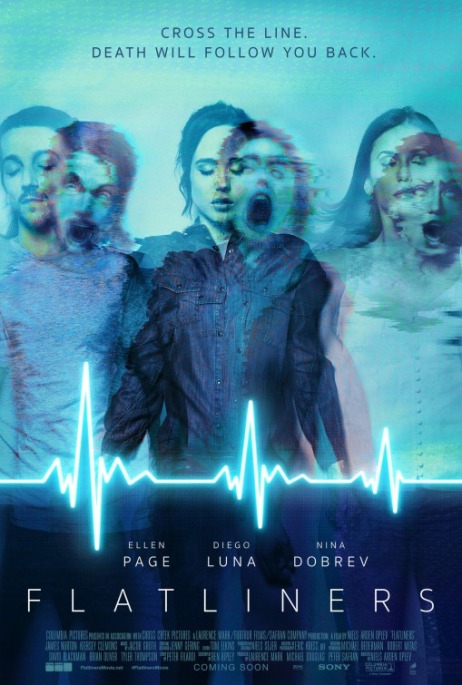 Five medical students obsessed with the afterlife stop their own hearts to experience near death experiences. But when they’re brought back, they do not come back alone…

For the uninitiated, this is a remake of a 90’s film, that also starred Kiefer Sutherland, which is why he here makes a cameo. It was a well received film in it’s day, with Julia Roberts, William Baldwin and Kevin Bacon turning in good performances and the film explored some interseting ideas and had some real tension. When I heard this was coming out, I was sceptical about a remake, but heard that it was going to be a sequel of some kind.

It’s not. It’s just an updated version of the 90’s film. And honestly… it’s not that great. Take for example a scene in which a trainee doctor tells another that a man needs a testicular exam, as a prank. The trainee then, for some reason, tries to force himself on the patient before a nurse intervenes. Think about it. In a serious film we see a patient used as a prank and undergo what is essentially sexual harrassment. There’s no way that guy wouldn’t sue. It’s just… stupid. Why have that joke in there, especially when it’s more disturbing than funny?

Anyway, on the whole, the film is mostly just OK. It doesn’t do anything original with the material, the performances are fine, but the script makes everyone look kind of immature and not that likable. It’s entertaining enough, if you haven’t seen the original. But then, since the original exists, and it’s a great film, just watch that.

See It If: you’re just looking for something to watch. It’s pretty forgettable, and pointless if you’ve seen the original.