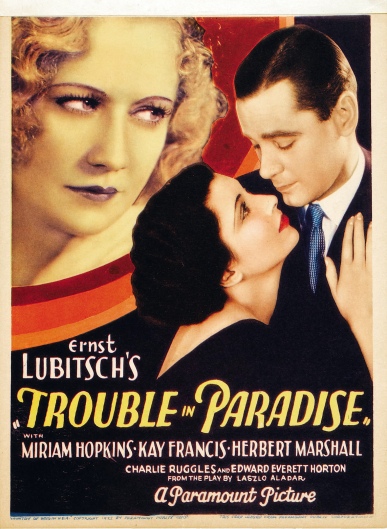 A young thief and a con man meet in Venice, and catching each other out in their crimes, fall in love. They’re perfect for each other. But when they meet a wealthy heiress and decide to grift her out of her fortune, the con man finds himself with feelings for the kind woman. Can he go through with it? Is he falling in love with her?

It’s a comedy in the screwball mold, which Lubitsch did so well. It’s all about the sexual tension and witty dialogue between all involved, with the convoluted plot coming in second to that, rather than overshadowing it. The Lubitsch Touch was the famous way that the director had of creating a sophisticated comedy that founded the screwball comedy, moving away from slapstick, and this film is a famous early example.

What I really like about it is that it comes in before the production code, which was an early form of censorship in films that predated the certificate system that we have now. Films started to be heavily censored for morality and the like, but before the code, films were quite daring. And this film deals with crime, immorality, sex and humour. It’s a really fun film, that sparkles with wit and sexuality.

Personally, I love a screwball comedy. The will-they-wont-they of the relationships and the quick witted dialogue, as well as the generally savvy women in these films. They feel perennially fresh to me. In this film, I also love the way that the grifter falls for the griftee, it’s a nice touch and lends itself to the opportunity for a great deal of funny situations. But the thing that makes this film, is the ending. It doesn’t feel like a cheesey rom-com at all, keeping the film sweet, sassy and original.

See It If: you like witty, sharp films with a bit of romance thrown in. This one is a delight.