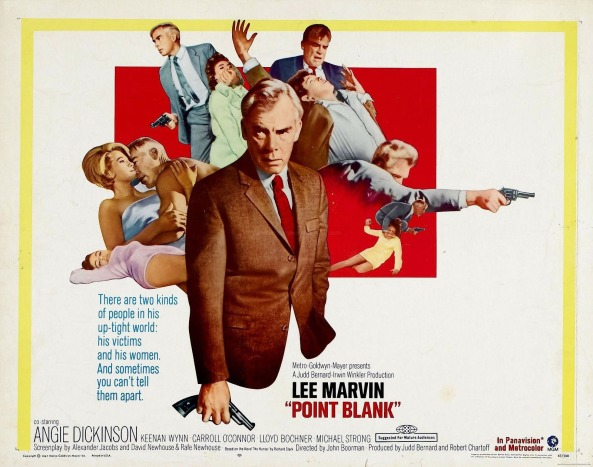 Walker (Marvin) has brought of a heist to help a friend who owes money, but when the take is less than expected, his best friend shoots him, taking off with his wife and the money, leaving him for dead.

But Walker is not dead. He returns years later for the money he’s owed, which is a paltry $93,000, and pursues it relentlessly, taking down his ex-wife and his enemies all the way to the top.

I loved the visuals of this film. The little shots that cover small things, objects, scenery, they give the film is paces and it’s pauses that are so necessary in the relentlessness of Walker’s plan. And the wide screen covers the wide urban landscape beautifully, or the action sequences and fights.

Angie Dickinson is a sweet, sad presence in this film, to me. The sister of the ex-wife, she’s used and discarded, a beautiful and unappreciated, passionate figure. I feel like she’s the softness in this film, the humanity amongst the amoral and hardness of the other characters, but she’s unable to redeem Walker.

On the other hand, while this film is kind of bleak, it’s addictive too. You never know what Walker is going to do to someone who gets in his way, and his insistence on getting his small amount back makes him all the more intense, you know he’s a man with nothing to lose. His face feels like a bit of a blank, but you know that there’s a lot going on in there.

It’s a sharp, interesting film, satisfying in the way it takes down the bad guys with violence and an impassive face. It feels like a trick that this era excelled in, with Dirty Harry and Get Carter coming to mind as similar films.

See It If: you were ever wronged by your best friend… just kidding, a great revenge film, satisfying and beautifully shot, a sexy thriller.