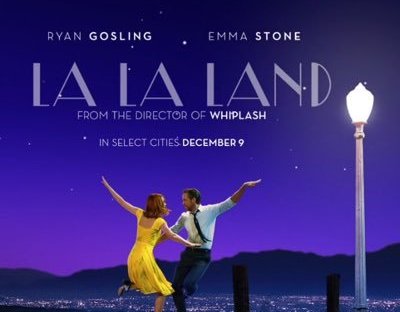 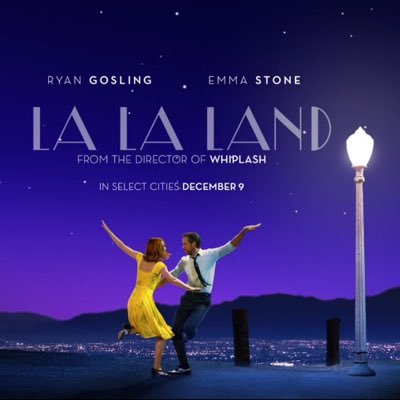 Perhaps with all the things going on in the world right now, a musical is just what we need. So often, amusingly, musicals are about dark subjects, but told lightly. And I kind of like that about musicals (watch Meet Me In St. Louis again if you don’t know what I’m talking about). Here, the tensions between an actress and a jazz player  (Stone and Gosling) as they meet cute in LA, and initially don’t like each other, are explored, as well as the changes when one of them starts to be more successful than the other. I won’t go into it too much, but there is not all sunshine and roses here, though the overall tone is happy.

What I really liked about the film is the gentle use of humour, with Gosling being gently hilarious, and Stone is as delightful and warm as always. They work well together. I also liked the use of a lot of primary colours, and strong postcard-like visuals. It’s a beautiful film to look at, with so many little moments. There are also many references to Old Hollywood, with classic movies talked about, and old movie posters or stars gracing the backgrounds. A homage to classic Hollywood. It’s interesting to me that a lot of the musicals that were made back then came out in response to the darkness of the second world war, as a kind of antidote. Perhaps there are some parallels in that, which I won’t explore right now… I also have to say that the songs are quite catchy, and the little dance numbers are beautifully done.

Either way, if you like musicals, if you’re a romantic or if you’re one of those who have a longstanding crush on Ryan Gosling, you’ll find much to love here. But for me… You know, I just don’t like musicals.

See It If: I can’t say I didn’t enjoy this film, I did, there’s nothing wrong with it. But perhaps I’m just too cynical to really love it. That’s personal opinion only, and I do recommend it to those of you who like this sort of thing. You know who you are.