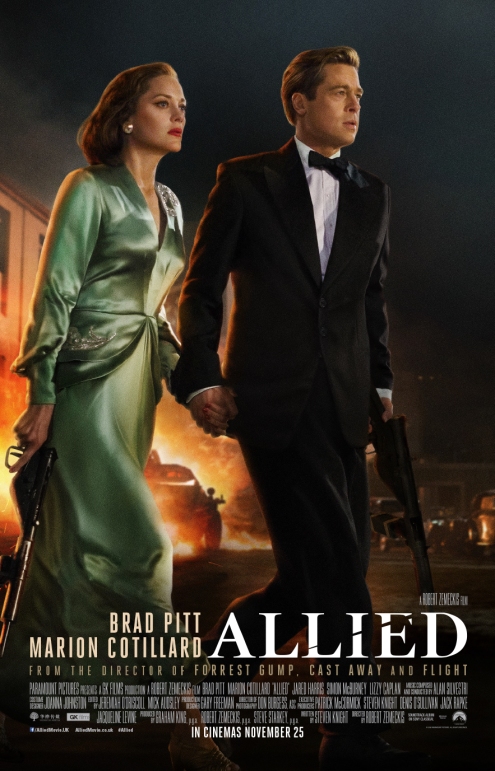 Part thriller, part romance, this film is the story of Max Vatan (Pitt), a Canadian Intelligence officer, and Marianne Beausejour (Cotillard), a beautiful French Resistance fighter, who meet during an assassination mission in Casablanca in 1942. Strangers playing the role of a married couple, they find themselves falling in love for real, and when they manage to survive the mission, he asks her to come with him to London and marry him.

As they start to build a life there, though the war rages on around them, their home is a happy one. But when questions from higher up start being asked, Vatan has to start questioning how well he knows his beloved wife, and if she really is who she says she is.

The costumes and visuals of this film are absolutely stunning. In each scene, Marianne’s dresses, shoes, hats and bedroom attire are so on trend and beautifully cut, it’s hard not to fall in love with her. (It did cross my mind to wonder how she managed to dress so well and have so many costume changes during those days of rations, but I’m certainly not complaining). The locations, initially in Africa and later in Hampstead, London, are so evocative of the time period, and beautifully shot so as to have a warm, nostalgic glow, and flowing lines, echoing the sense that all can be a beautiful veneer whilst something is also very wrong. Domesticity and simplicity juxtaposed with the beautiful lights of enemy planes and bombs falling from the skies.

The action sequences themselves really shine, and are some of the highlights of the film, but there are some odd little things about this film. There are moments when Pitt looks as though he’s been airbrushed in post to look a lot younger, but it’s not always consistent. The chemistry between the stars is good, but not excellent, especially in the earlier scenes, when something about Cotillards performance to me felt rather forced somehow, a little showy. It’s very unusual, since she’s a wonderful actress. However, this is not all through the film.

Which is fortunate, since at heart this film is a romance. And is cut like one. Whilst there are elements of guessing game thriller, like Klute for example, in this film, it’s not really the core of the film. Whether or not she is who she says she is, the film is about how much Vatan loves Marianne, rather than anything else. Which is nice, and there are some emotional notes that soar, and some that are rather cheesy, (the ending springs to mind, no spoilers!). But on the whole, that love is what makes the film really sparkle, and keeps you watching and wondering. It’s quite beautiful.

See It If: it should please you if you love your romance with a little bite, or your thrillers with a little heart. World War 2 fans will love watching the era brought to life.