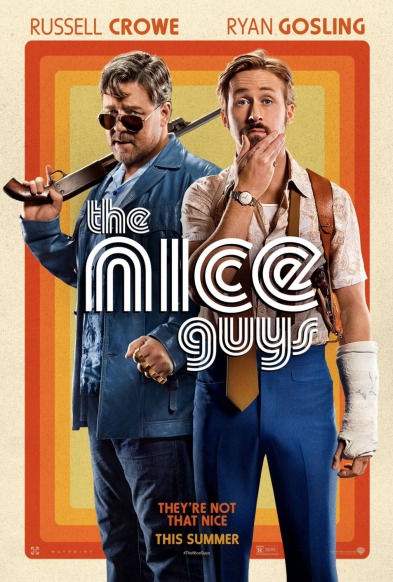 Shane Black, back in the day, was the script writer, especially for blockbuster buddy comedies. Lethal Weapon was his huge break out, with sequels and films like the Last Boy Scout and Long Kiss Goodnight following. But Black felt like his films were not always best directed by others, and he looked to write and direct. His breakout hit Kiss Kiss Bang Bang showed that he had the talent, and reignited the careers of Robert Downy Jr and Val Kilmer.

In this film, Shane Black is back behind the camera, with all the witty dialogue and odd couple comedy that you could like.

Russell Crowe is the tougher of the two, a man who needs to learn to allow his softer side some purchase, without choosing violence as the only option. Gosling … well, there’s a lot that he needs to learn, as the bumbling investigator, who survives by making his teenage daughter a mini-adult and crutch. Both leads are charismatic and have excellent chemistry, delivering lines and falling over each other and piecing clues together like old pros. It’s fun to watch, and the black comedy is really good.

I enjoyed this film, but I have to say that unlike Lethal Weapon, it didn’t amuse me enough to make me feel like I’d like to watch it over and over again.

See It If: you like other Shane Black films, a bit of black humour. It’s a fun ride.