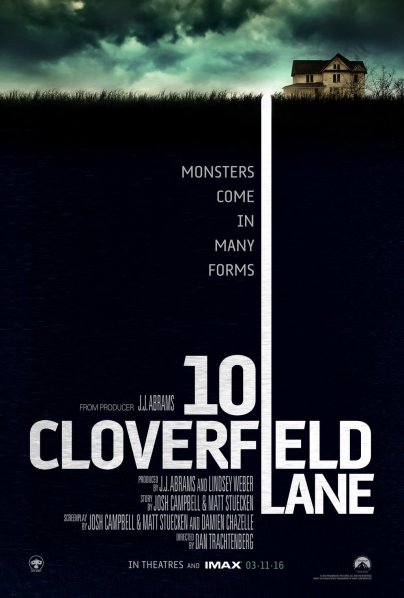 Set in the same narrative world as the events of Cloverfield, but not exactly a sequel. Or a prequel. (A sidequel?) This film is more of a thriller than the sci-fi movie that it’s predecessor is.

In this film, a young woman is in a car accident, and wakes to find herself locked in an underground bunker with two men who tell her she can’t leave because the world as we know it has ended. There has been some kind of chemical warfare.

Of course, Michelle (Winstead) initially doesn’t believe them, and tries to escape, but she soon sees evidence that they may be telling the truth. She slowly develops a friendship with Emmett (Gallagher) but something about the strange moods of Howard (Goodman) suggests a threat, and there may be more going on than meets the eye.

The film is often funny, but the threat inherent in the presence of Howard, the kind of man who builds a bunker, is a very real threat. You are constantly left guessing whether he’s just a kook trying to keep them all alive or someone who has done very bad things and is manipulating them all. Goodman is excellent in this role, his ability to play someone benign who might also by a psychopath is electric, and keeps you guessing as events unfold.

See It If: you’ve been missing good quality thrillers, this one is brilliant.