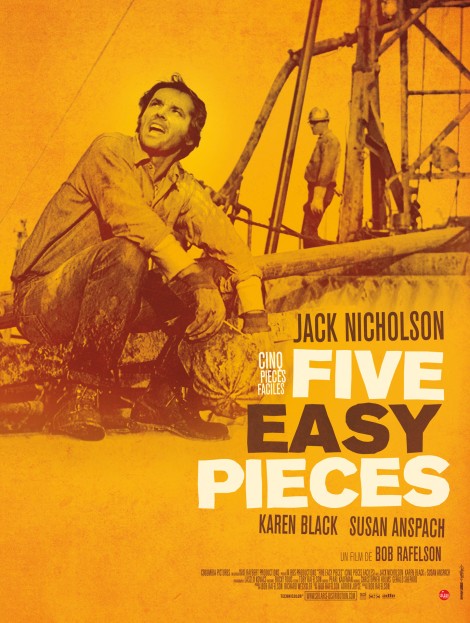 Robert (Nicholson) works on doing odd jobs, roving from bars, his home with his girlfriend Rayette (Black) and the beds of other women, never settling anywhere, til his sister lets him know that his father is dying. With his girlfriend tagging along, he heads back to his family home, facing his past as a concert pianist, and his wealthy family’s expectations.

Robert is a free spirit with a mean, selfish streak as played by Nicholson, and he is fascinating to watch. The characters around him are only mildly less subtle, each one a facet of society personified, but without ever falling into caricature. The film embodies the feelings of a post hippy society, of people who fit into no real camp, tired of the rhetoric of each.

It’s a Must See Film Because: Robert is full of life, but he’s not a likable guy. But then, no one in this film really is. He doesn’t take Rayette seriously, or the lives of his friends, who live in a trailer, or his jobs, because he can always get another. Without him saying much, you’re aware that he finds it all unchallenging, boring, devoid of life. Beneath him. But when he returns home, he also finds it all rather transparent, ridiculous and fake. People there are just as shallow and dull.

In some ways, you can’t blame him, they are all pretty awful, other than his sister, who is the one person he listens to and has some genuine feeling for. His brother’s fiance, though, does catch his eye, and he all but demands a relationship with her, but it’s clear to her that he’s not serious about anything, and that she wants a man who will provide her with a life style, rather than a life. In this way, it’s a very subtle film, in that you have to figure everyone out, but I think it’s also quite an indictment of society, and perhaps this hasn’t changed much. I think people can relate to not belonging, though they don’t necessarily have to behave as badly as Robert does.

See It If: you like vintage Nicholson at his best, or if you ever wanted to forge your own path.