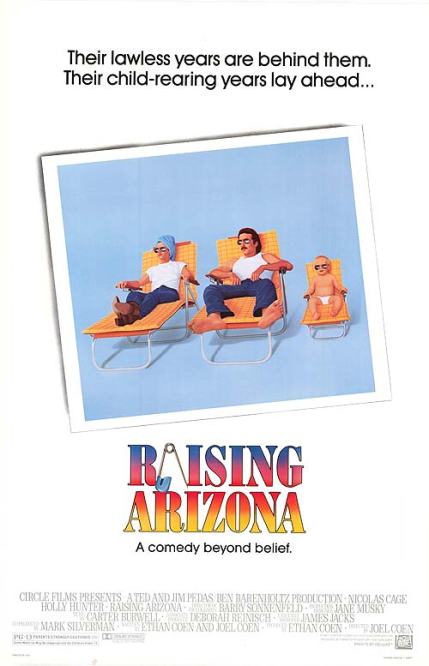 Mad-cap caper in which an ex-con (Cage) and an officer of the law (Hunter) couple kidnap a child when they find themselves unable to conceive. But things get complicated when two escaped prisoners turn up and a leather clad bounty hunter is on the trail of the missing child.

Colourful, loud and riotous, the film is really wacky and very funny, though a little flabby around the middle. It’s a bit like watching a cartoon but with a dose of real sentiment to ground it. Cage and Hunter as the odd couple come across as quite sweet, though misguided. You want things to work out for them. The supporting characters like the escaped con and the family of Hi’s boss are played by what would become Coen brothers staple actors John Goodman and Frances McDormand.

Why it’s a must see film: The second film from the Coen brothers, this really started to cement their style as comedic writer/directors who often focus on crimes that go wrong. It’s also a classic because it’s a really good comedy which pushes the boat out into unusual territory.

See it if: If you’ve never seen a Coen brothers film before, this is a good place to start. Should also please comedy lovers. Nic Cage is enough of reason enough to see this film!