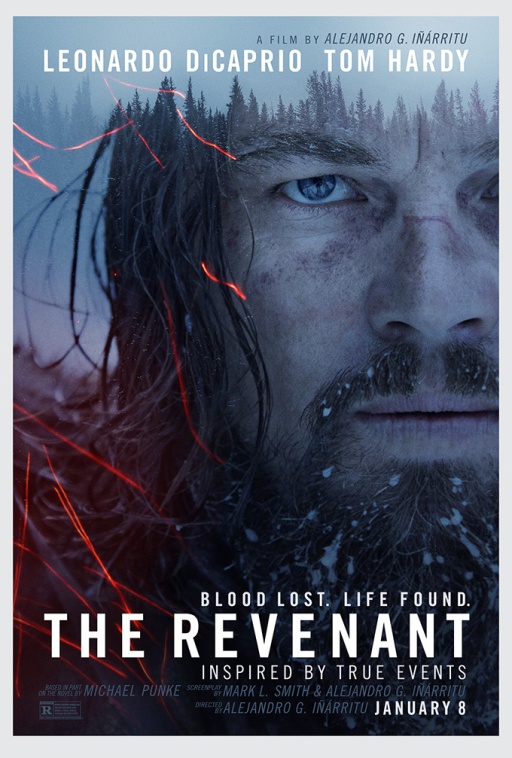 1820: After a being attacked by a bear and seriously injured, a frontiersman is abandoned to his fate by a member of his team in the American wilderness, with only his desire for revenge to keep him alive.

I was pretty excited about this film, and was looking forward to seeing it for a while. And I wasn’t disappointed.

What I didn’t expect was how beautiful the film was going to be. The visuals are like a love song to the American landscape, the frontier, the adventurer and survivor that lies deep in the American psyche. Whilst the people in the film undergo the most intense suffering that man or nature can inflict, the wind still whispers through the tops of the forest, and snow and fog carress the mountains. The camera floats, gently, following the action in ways that amazed me; how on earth did they get a jib or a crane to those locations? How would a steadicam manage those shots?

All of this beauty is, of course, juxtaposed against the brutality of what Hugh Glass (DiCaprio) suffers. Nature and man are equally cruel in this film. You wonder how anyone really survived the frontier (the answer, loads of people didn’t) and it’s really something to see this period of time brought to life in a meaningful way like that.

But to return to the story itself, it’s based on events that happened to a real adventurer and frontiersman, Hugh Glass, who lived to tell the tale after being attacked by a bear and left for dead. In the film’s version of events, Glass has a past: a deceased Pawnee wife, a son who nearly doesn’t survive the burning of their home, and his murder of the officer who killed his wife. His son works with him, a teenager called Hawk (Goodluck), and although he is a rough and ready father, Glass clearly loves his son dearly.

Fitzgerald (Hardy), is his opposite. He is rougher, more racist, aggressive, grasping, dishonest. Not a gentleman, as my grandfather would say. He dislikes and distrusts Glass for his aloofness, his Pawnee son, being different. After Glass is attacked by the bear, he is the one who tries to “mercy kill” him, but ends up killing Hawk in the process, and leaves Glass for dead. Perhaps he is characterised a little too simply as the racist, ignorant bad guy, but he is very much a personification of the prevailing social attitudes of the time, and with Hardy’s performance, he never feels one dimensional.

What follows from this point in the plot is sheer survival. The mountains are full of Cree, French military, wild animals, deadly cold… It’s an incredible story of determination, survival and, to me, reality. You had to be really tough to survive back then, and for a man alone to do it, with little in the way of provisions and tools, and recovering from being attacked by a bear is truly remarkable. The film doesn’t shy away from realism, nor does it create adventure or gratuitous violence for the sake of it. It all feels very realistic.

Which makes it all the more amazing to watch. I found it inspiring and real, I really liked the way in which the time period was captured, including the social mores and political history. There is a lot going on in this film. I also liked the dreamlike quality of the way it is filmed, and the inclusion of memory, nightmare, and personal longing seeping into Glass’s perception in a ghostly way.

See It If: You like Westerns, survival narratives, if you love the American landscape or history, or if you’re a Hardy or DiCaprio fan. I think it’s one of the best films of the year, but it might be a bit confronting for some viewers.