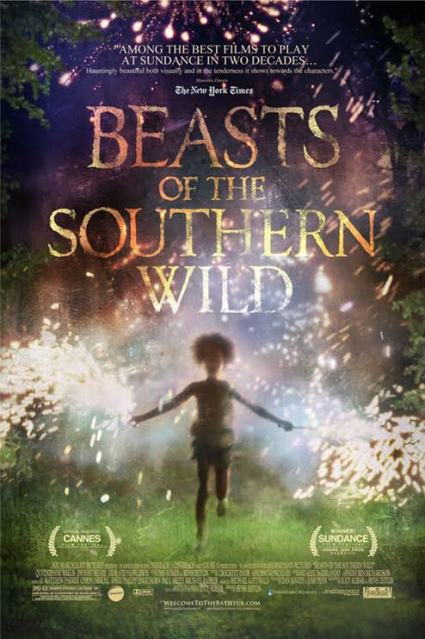 Faced with both her hot-tempered father’s fading health and melting ice-caps that flood her ramshackle bayou community and unleash ancient aurochs, six-year-old Hushpuppy must learn the ways of courage and love. ~ IMDb

I’m not sure where to start on this one. It’s the kind of film where it ends and there’s a silence in the room as you take it all in.

Hush Puppy, the tiny little girl who is the protagonist, played by the incredible Quvenzhane Wallis, is captivating and the world she lives in feels very real, present time and yet completely apocalyptic. She’s such a beautiful little thing, and at times you want to slap her father, who is generally cruel and also a lost little boy himself, as he pushes her away and offers her no affection, in a hope of making her independent.

In a way, it’s a story about a little girl in a brutal world trying to figure it out and become strong enough to survive; in another way, it’s about the survivors of Hurricane Katrina. But I think most importantly, it’s kind of like life. I think we all feel sometimes like we’re tiny in a huge world, and no one is really in control. We all feel like lost children when we lose our parents, or are threatened with their loss, no matter how old we are. We all feel responsible for the polar ice caps melting and global warming, and feel like we can’t hold back that tide. And we all go through the pain at some point of loving someone who isn’t good at loving us back.

We also all grow up, and have to learn what it means to be strong, how to feed and fend for ourselves, and to face our own wild beasts. We also have to learn that there is no magic that will fix the unfixable, and that change is inevitable. But also, that the world is a navigable place of extreme beauty and loving community. As the Desiderata says, “with all it’s sham and drudgery, it is still a beautiful world. Strive to be happy.”

It’s also a very imaginative film, it’s not a simple drama or a simple story. There are fantasy elements in the film, there is a sense that nature might punish, or that a mother who “swims away” might actually be out there in the ocean (or she might not, depending on how you read the film).

What stays with you though, is that little Hush Puppy’s face as she looks out over the water in the last scenes. What will happen to her? How can one little girl be both so vulnerable and so strong? And how did such a young child give such an amazing and nuanced performance? You’ll want to take that tiny girl home with you!

See It If: you want to see one of the best performances of our decade, you like films set in the American South, or if you want an accessible film that is also about so much more.