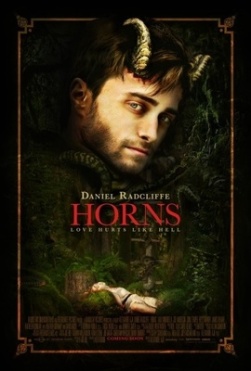 Following the murder of his longterm girlfriend, Iggy stands accused of her murder, and wakes up one morning with horns sprouting from his head.

A confused film, that feels as though it’s all meant to be a college movie, but has a serious teen-drama Twilight tone to it, Horns is a film with a great premise, but incoherent outcome.

The performances are all very good, and it’s nice to see Daniel Radcliffe flexing his acting muscles, as it were. The real problem lies in the films tone. It appears that the director can’t decide whether the film is a comedy or a tragedy. Iggy (Daniel Radcliffe), soon after he is introduced to us as the good guy apparently accused of a murder he didn’t commit, pees on the memorial set up at the site of his girlfriends murder, and then sleeps with a random waitress who takes pity on him.

Which makes us wonder why we are supposed to care what happens to him for the rest of the film? Though it might have been meant as a justification for the growing horns, which are never adequately explained, it simply serves to undermine our interest in the main character. Radcliffe plays Iggy for emotion, when it seems that Iggy should be played for laughs. A clear lack of directorial vision.

And that sums up the film as a whole, really. It never quite works, even though it has great performances and production values. None of it really makes sense, or is explained properly, and it ends up feeling rather long.

See It If: You’re a hard core Radcliffe fan, otherwise, give it a miss.