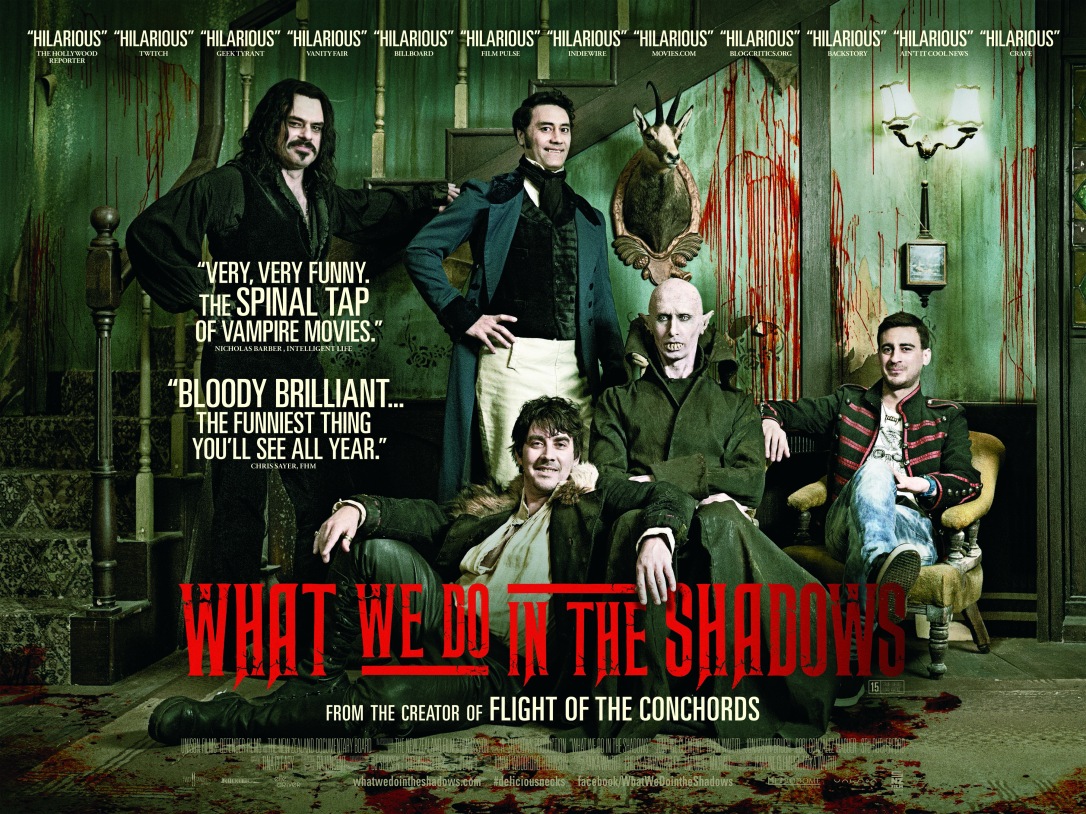 Logline: A mockumentary following the lives and loves of a house-share in New Zealand, occupied by four vampires, in the lead up to an annual ball.

This is one of the best films I’ve seen in ages!

It’s like a documentary about shared living, with all the pit falls of whose turn it is to wash up and deciding which club to go to, but with bloodsucking vampires. And it works because it very cleverly takes the tropes of vampire life and places them squarely in reality. How do you decide what to wear when you can’t see your reflection? How do you get into a club without someone inviting you in?

I thought that I might not enjoy this, because of the mockumentary format, (I have a strong aversion to shaky camera work and long shots of nothing happening) but this film does an amazing job of using the style as a way to draw you into the characters, as they tell us directly about themselves, trying to impress us and witnessing them at their least impressive. There’s something delightfully human about these vampires, in their struggles to find victims, deal with their familiar and have housemate meetings. The practicalities of life for the modern vampire are hilariously explored in this film, with a strong element of black comedy, after all, the course of sucking the blood out of someone and trying not to eat your human friends never did run smooth.

On another level, the film is actually quite lush and beautiful, much like it’s country of origin. The house the vampires occupy is a sort of homage to faded glory of an earlier era of life, which I kept thinking would be incredible (and creepy) to live in. The camera captures a lot of this romanticism, framing the action and settings in ways that capture the drama without becoming too filmic and always juxtaposing it with the everyday: the elegance and violence of the old world amongst the mundane of the suburban life. It works really well.

The performances are all really good, a particular favorite being Stu, played by the directors old housemate, Stuart Rutherford. He amusingly takes everything in stride, and is a great foil to the other characters heightened sense of drama. However, all the performances are excellent, really natural and with a brilliant sense of timing. The foppish Viago (Waititi) is endearingly earnest, against the brutishness of his other housemates, the lothario Vladislav (Clement) and short-tempered Deacon (Brugh). However, their own histories and desires make them more than one dimensional. It’s a very well crafted and clever film.

The supernatural elements also work really well. They don’t over use special effects, not do they use the “found footage” technique of not showing you anything, as if that somehow makes it more realistic. The effects used all further the plot in some way or are a clever site gag, and never spoil the moment by being cheap.

But yes, techniques aside, it’s really funny. The script is pure genius, and it’s well supported by the perfect casting. When you think about it, vampires are not nice people, and yet their vulnerability in this case makes you like them a lot. As the plot builds towards the climax of the yearly ball, the characters around them and their own pasts catch up with them, and their underlings have to come to terms with their own mortality or immortality. It’s a brilliant, very funny film. I highly recommend it.