Skip to content
July 31, 2014August 6, 2014 CravenWild
I actually got through a load of books this month, so read on if you’re looking for something to read, or what to avoid reading perhaps… (Thought I’d add some pictures this time) Why review books on a blog about films? Because the best directors, writers and film makers read widely, always on the look out for inspiration and wider experiences of life. Also… why not?

Logline: Following his wife’s death, and a series of haunting dreams, a writer retreats to his holiday place in Maine to recover from writers block. Things get stranger as he becomes embroiled in a custody case to help a beautiful young woman, and starts to uncover the towns deadly secret that refuses to stay buried…

This is the first Stephen King book that I’ve read, since an abortive attempt as a child left me too scared to venture past the first chapter! Probably not the best one to start on, as my brother pointed out to me, but I thoroughly enjoyed reading it. It grips you, it’s not predictable, it’s scary enough, and has a lovely tongue in cheek quality. You’re really drawn into the story to discover what’s happening to the main character and the small town, and the ending doesn’t disappoint. Whilst this isn’t one of Stephen King’s most famous, (though there is a film version with Pierce Brosnan) it is really good. He certainly deserves his fame, he’s a wonderful writer. 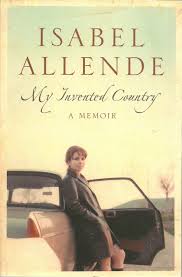 Logline: Allende remembers the Chile of her youth, discussing various aspects of the country, national character and politics through the eyes of a political exile.

The title comes from Allende’s awareness that exiles always remember their country of origin with rose-coloured glasses, as well as her being an author whose books, particularly her earlier works, are set in Chile. This book has the nice narrative flow that her other books have, but some of the anecdotes are recycled, and the book feels a little contrived. I understand that she was asked to write about this subject, and the book is a nice, small book which wanders through its’ subject nicely, but it’s more a curiosity, for those interested in her works or in travelling to Chile, not for seekers of great literature. 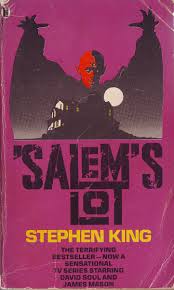 Logline: A writer is drawn back to a small town in Maine where a house with an evil past haunts his memories. When children start to go missing, and locals start to experience a strange illness, all evidence points to the new occupants of the eery house being vampires.

This was the Stephen King novel that it was recommended that I read first: an entry level King. I can understand why it’s become a classic, it really drew me in, and the twists and turns in the narrative kept me guessing. I was quite happy to let go and let the story take me. The characters are all well drawn and interesting, the gore and scares work really well and have just enough silliness to be fun without tipping over into ridiculousness. I suppose that the story feels a little dated, it was written a few decades ago, and horror has advanced in some ways since then, but honestly, I felt that this added a wonderful pulp feeling to the whole book that only made me get more into the spirit of things. I’ve been recommending it to friends.

It’s a little hard to define this book. It’s the size and shape of a novel, and as it’s loaded with anecdotes and information, it’s not really a cookery book. And yet a large chunk of it is recipes, written in a humorous and playful style. It is a really sensual book, which I only came across because I’m reading all Allende’s works, but I did really enjoy reading it. It’s in true Allende style, with her lovely way of addressing the reader, and her sense of humour and passion for life, as well as a feeling of magic suffusing the whole thing. It was a treat to read.

Logline: After the death of her mother, a woman is approached by a strange older lady whose story shatters the myths of her idealized father and her parents happy marriage. This woman’s story of love, betrayal and tragedy during the McCarthy era tells the story of her fathers other life.

Oh my God, this book was dull! There’s nothing wrong with it exactly, and it’s not badly written, but it’s just kind of bland. None of the events come as a revelation, the characters fall apart over problems because they can afford to, and the main love interest, Jack, is really weak, which makes you wonder why they are in love with him. Which is a shame, because the stories of the McCarthy era and the Communist purges are, in reality, terribly moving.

Logline: Life in Paris in the 30’s for an often unemployed American writer.

This book reminded me a bit of  Orwell’s Down and Out in Paris and London in subject matter, but it’s no where near as good. It’s self indulgent misogyny, really, with some casual racism thrown in for good measure, though everyone seems to have thought it was terribly clever and honest at the time. I kept thinking as I was reading it that Marilyn Monroe was married to this author: maybe if she’d read this book, she could have saved herself a bad marriage.

Logline: The collected Peanuts comic strips from 53 – 54 about the well known characters Charlie Brown, his dog Snoopy and the kids on his block.

These hardcovers are a collection of the entire works of Charles M Schulz Peanuts comic strips, this one covering the two years of 53 and 54. I grew up reading Charlie Brown comic strips, and it’s amazing that Schulz began them in 1950, and they ran til almost 2000, adapting to changing times but never losing that innocent and insightful view of the world. These early volumes are really interesting as the characters are still being developed. In this volume, we are introduced to Pig Pen, and Linus, who is still learning to crawl,  starts to slowly develope his famous dependency on his blanket, whilst Snoopy starts to talk and imagine. It’s a great comic strip with some hilarious moments. I think these books are great for Peanuts fans, they’re beautifully bound and have excellent introductions by, for example in this volume, Walter Kronkite.

Logline: Details the four years during the 90’s when the author was living in Fidel’s Cuba with her husband and two children.

I wasn’t sure about this book at first. For some reason I put off reading it for a while as being about something I was interested in, but having the small font and factual narrative that sometimes make memoirs a bit dull. But actually, it gripped me from early on, and had my laughing or gasping with horror from the start. It’s a really interesting and personal look at what it’s like to live in a communist country, from a North American’s perspective, what life in Cuba is like for different people, and how adapting to life in other countries can be so intense at times. A fascinating read, the author has an intelligence, compassion and attention to detail that draw you into her life and experiences, without being patronising or judgmental. This is a really good book.

Logline: The doctors daughter finds her pleasant life interrupted by her father’s remarriage, and finds her charming new stepsister to be a rival for the affections of the Squire’s son.

It’s hard to write a decent log line for this book because there’s a huge cast of characters all of whom have their little impacts and intrigues, and the rivalry is not what a modern reader would expect between two stepsisters, being neither bitter nor acrimonious. Which makes this book refreshing. I’ve never read Gaskell before, mostly because her books, even though they follow the serial nature of other Victorian novels which is appealing, are more domestic in concern, though I know that other novels of hers do have a political nature. The domestic life of the English Countryside in the 1830’s, when the story is set (it was written in the 1860’s) is actually quite interesting, and the social mores and concerns are not dull, though they are also not as dramatic and sweeping as sensationalist novels of the time. It’s a good book, and I enjoyed reading it. The characters are well drawn and human, and are interesting enough for you to care about them, and also funny or tragic by turns. It’s a fairly slow book, and yet, it does draw you in and keep you interested. I find the nature of society depicted at this period of history quite amusing, when a girls reputation was everything she had, and the class divides were so universally accepted and acknowledged. However, I think this book might not be for everyone, and though I did enjoy it, and can see why it is a perennial classic, I do prefer the Brontes or Wilkie Collins. Gaskell seems a little repressed for me, though this is purely personal preference.