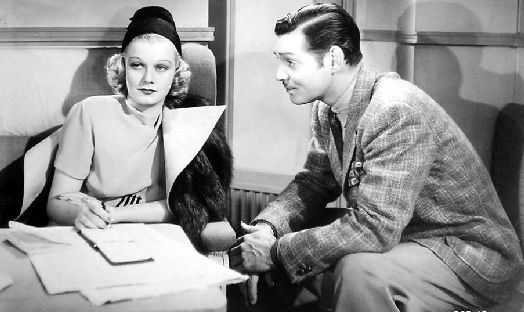 Duke Bradley (Gable) is a bookie who is given a stud farm by a man who owes him a large gambling debt. But when he goes to Saratoga to claim it, the gambler has died and he comes face to face with the man’s beautiful daughter, Carol (Harlow), and her millionaire fiancee. While Carol hopes to fix races to raise the money to pay off the debt, Duke hopes to get her fiancees money by taking his bets.

It’s a film that pitted two stars who glowed together on screen and who had successfully been paired together before in box office hits. Gable has a raffish charm that makes him a lovely leading man with a bit of the devil about him, and a wonderful comic timing. And Harlow was his match, with her halo of silver blonde hair and quick wit, she oozes sensuality. It’s a film that should have been a genre win, where the two lead characters resist their attraction and yet wind up together at the end.

But during the filming of Saratoga, Jean Harlow suddenly died at the young age of 26, of eremic poisoning. It was a tragic death that it would seem could have been avoidable, with some stories blaming misdiagnoses of her illness and others blaming her mother who is said to have not gotten any medical help for her daughter because she was a Christian Scientist. Either way, a bright young star was snuffed out tragically young.

The film is generally considered to be a curiosity, because the death of one of the leads led the film to be a little cobbled together. The plot itself is fairly flimsy to begin with, but the scenes where a body double is used to stand in for Harlow are fairly obvious and she had not shot enough scenes for the ending, which then had to be changed. But it is Harlow’s final film, and is  kind of worth watching for that alone. So many Hollywood blondes seem to come to a bad end, and Harlow was one of the early ones who died young, at the height of her talent and fame. And the film is worth seeing for that reason alone.

See It If: one for Gable and Harlow fans, this sparkling actress was the original platinum blonde, and though this isn’t her best work, it’s her final time on screen.