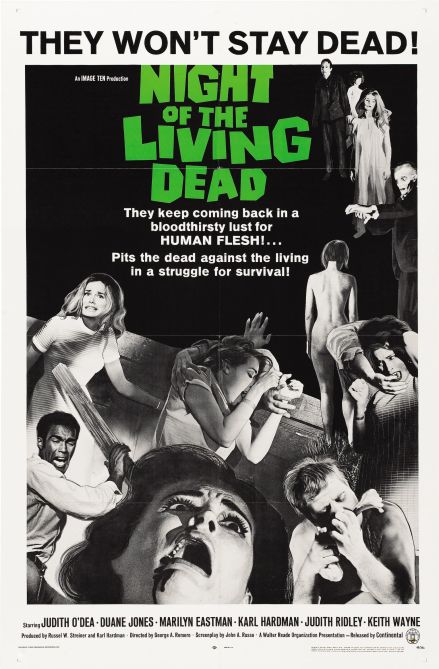 Today is Night Of The Living Dead’s 50th Anniversary, so if you haven’t seen this horror classic or of it’s an old favourite of yours, then this might be an excuse to watch this film.

“They’re coming to get you, Barbara…” teases Barbara’s brother, as they visit their mother’s grave. A tasteless joke from an annoying sibling that soon turns dark when he’s killed by a flesh eating ghoul. Barbara flees for her life, and find refuge in a old farmhouse where others soon join her. They fight to survive as the dead rise and descend on them, and listen to the radio in a hope that they can find out what’s going on in the world.

With the film shot in black and white and it’s opening being a little camp, you could initially see this film as cheap, but it ratchets up the tension as the people in the house have to make impossible choices and shows itself to be a groundbreaking film. There are questions of trust, who should lead and what their options are, but where many horror films are about mystery and survival, this film taps into the confusion and despair of the late 60’s and takes it to a dark place. It’s bleak, twisting and gripping. Many critics over the years have commented on the way that the film is shot in a style that’s more gritty and documentary-like which gives the film a sense of realness. It’s a film that changed the horror landscape and has inspired filmmakers over the last 50 years.

It’s a film that relies on tension and emotion to create a feeling of horror, and stands up as a wonderful film after all this time. Well worth a watch. Or a re-watch.

See It If: you like films that get under your skin. It’s a horror classic and a dark, bleak tale.