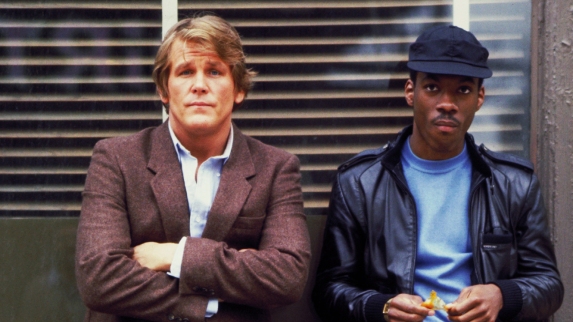 Films with big budgets, big stars, action sequences and wise-cracking dialogue felt like a staple of the 80’s and 90’s. One of the most seminal of these was the 48 Hours films. Not only is 48 Hours the first film that Eddie Murphy starred in, but it also largely credited with being the first film in the “buddy cop” sub-genre, which led to wildly successful films of that genre being made later in the decade and beyond. Buddy Cop films involve two disparate types who must overcome personal differences, that cause humorous situations and banter, in order to solve a crime and catch a criminal. It’s a situation that has been richly mined since by many filmmakers, including director Walter Hill who  returned to make the sequel, Another 48 Hours. 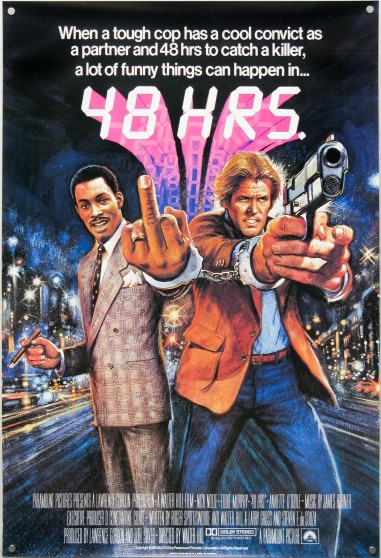 In San Francisco, Jack Cates (Nolte) is a cop on the trail of an escaped convict when two of his fellow officers are gunned down. Determined to catch the guys who killed his colleagues, he gets their former partner Reggie Hammond (Murphy) out of prison on parole, but they only have 48 hours…

Cates is a hard nosed cop. He’s been in his job for a long time, he’s hardened by his life and doesn’t work with with others. Hammond is his opposite, a relaxed, smooth talking criminal. What Cates achieves with brute force, Hammond achieves with finesse and style. They’re polar opposites, whose lives and experiences have been completely different, and whose aims on the case are potentially at odds, but who manage to slowly come together and work as a team, and crack the case.

The outline of the film is fairly predictable, the search leading to set pieces and a climax where the ability of the two to work together and use their understanding of each other is the only things that can stop the bad guys, but it’s not the ending with this film, it’s the journey. The bad guys are pretty awful, so you want them to get caught. Cates is a jerk, but his intentions are good, and you want to see him get a bit of a comeuppance, but also solve the case. But he’s also the straight man to Hammond’s crooked one, and the film rests on Murphy’s ability to make you laugh. He’s an underdog with questionable morals, but he’s likable and very funny. The team up of two strong leads, their chemistry, leads to some very funny moments, some great situations that go in directions you wouldn’t expect, like scenes in which Hammond is able to shake down a bar of rednecks on a dare, proving he would have made a good policeman.

It’s also a film that holds up well over time. It’s early 80’s music and style are a delightful bit of nostalgia, and the humour, drama and action feel real, and keep you enagaged through the run time. If you like 80’s films, and you haven’t seen this one, it’s a classic.

This time there’s a drug lord in San Francisco, known as the Ice Man, and after 4 years, Cates almost has him. But when he shoots in self defence, he’s set to take the fall for murder, unless he can clear his name and catch the criminal king pin in 48 hours. When he finds out that the same guys that are after him are also after Hammond, the two are forced to team up again.

Well, there is some complicated business with Cates having a car and money that he’s been keeping for Hammond, which he uses as blackmail, and there’s also some further business to explain why Hammond is still behind bars, which feels a little shoe horned in to create a situation exactly like the first film, but this is sequel territory after all.

Our two heroes are again at odds, with slightly different aims and wants from the situation, and with Cates using blackmail to get Hammond’s assistance, a lot of the banter and power struggle that make the first film interesting are here again. There are a few jokes that run through the film, and some pretty good plotting and action sequences to keep you entertained. Most importantly, Eddie Murphy is in fine form, and the chemistry and humour between the two feels very natural and real.

On the whole, it’s about what you’d expect from sequels of the era. It’s designed to be more of the same, and not to be too innovative and alienate the audience who have loved the first film. Sequels have slowly come to earn more respect and to sometimes be as good or better than their parent films, but in this era, this was often not the case. It’s enjoyable fare, and good fun, especially if you liked the first film a lot, but somehow it’s not quite as good as the original. That said, these two films make a really fun double bill, and go perfectly with a night in and a pizza.