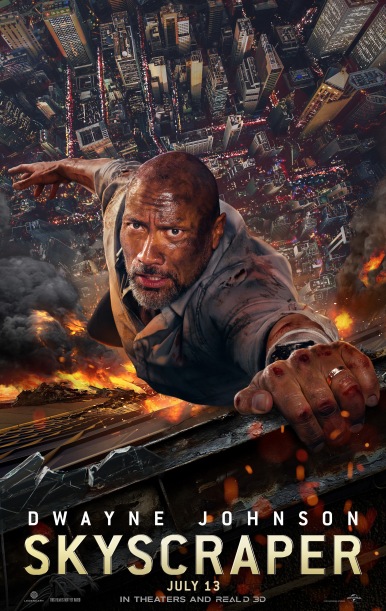 Will Sawyer (Johnson) is a security expert who moves with his wife Sarah (Campbell) and their twin children to Hong Kong to work on 225 story tower. But things go awry when criminals set a fire in the tower, and try to set up Sawyer. He has to make his way into the huge tower of flames to rescue his family and stop the bad guys before it’s too late.

There is a long tradition of disaster movies, and this one takes on some of the mantle of Towering Inferno, with a little Die Hard thrown in. It follows some of the classic tropes of the genre, but also mixes it up a little too. Sawyer is a veteran whose leg was amputated after a hostage situation went wrong. His wife is a very capable army medic, and though he’s heading into the building to rescue her and their children, she’s never weak or underwritten. They feel like a very real couple, who have a lot in common, and respect each others toughness and ability. The building is all online and has a tablet that accesses a lot of the security features. And the pearl shape at the top has a room that simulates realities, where you just know the final fight scene will take place. It feels like an updated classic action film, and for that reason, it feels really satisfying.

It’s a big, big film, and no one is bigger than The Rock. It feels like he bursts from the screen and manages to do things no normal mortal could accomplish, smashing his way through. It’s not in that sense a realistic film, characters run around in flame filled rooms that would have a normal human being dying of smoke inhalation, for example. Someone picks up Johnson and throws him across the room during a fight, which I’m convinced is impossible. But that’s part of what’s so fun about disaster films in general, and this one in particular. Leave your sense of credulity at the door, and let the film take you for the ride. It’s a spectacle of a film, but it has enough character development and plotting that you are invested. You care about what happens, and you do wonder how Sawyer is going to get to his family.

A film in the mold of classic action and disaster films, this is a vehicle for Johnson to show off his ability to entertain and carry a film. But he’s also joined by a solid supporting cast who are given enough to do that they feel real too. The skyscraper, with it’s tech and security systems, feels fresh enough for the spectacle of the fire and the set pieces. It’s all high tech, so even though we’ve followed heroes into burning buildings before, it feels fun and fresh. This film reminded me of classic action films from the 80’s in it’s format, and it satisfies in the same way, but without too much cheese. If you love big films, this is for you.

See It If: you love The Rock or action films. It’s a satisfying Summer action film, with spectacle and bad guys, but updated with modern tech and decent characters.