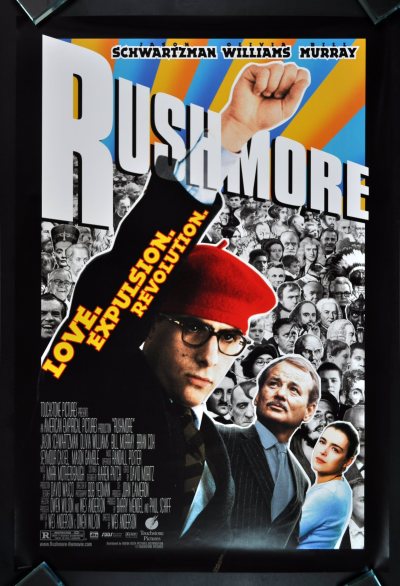 Wes Anderson films always have a vintagey, nostalgic feel, and this is present here, though it becomes more developed in his later films. This was his second film, the first being Bottle Rocket, both of which are co-written with Owen Wilson, who often pops up in his later films too. And also like his later films, it concerns itself with odd, off-centre people, tinging the hopeful with a little bitter-sweetness in their struggles for freedom and happiness.

Max Fischer (Schwartzman) is a failing scholarship student at Rushmore Academy. His life’s passion is being head of almost all the extra-curricular activities available, but for all that, he’s hardly popular. He falls in love with his teacher (Williams) and finds a mentor in wealthy Blume (Murray) one of the schools benefactors, but his life falls apart when he’s put on academic probation and his efforts to woo his teacher are met with failure, and worse, betrayal.

It’s an odd, sweet film, full of humour and awkwardness. Murray is delightfully sad throughout the film, and Schwartzman is awkward but somehow quite endearingly hopeless too. I love his Max, with his obsession with everything at Rushmore other than his grades, and all his machinations. To me, this film feels like a sad coming of age, loss of innocence, as he slowly has to face the realities of the adult world. As much as he loves Rushmore, at some point he’s going to have to graduate, and as much as he loves his teacher, there’s no real chance for him there.

Anderson films are always worth watching, they feel so human and vulnerable, and always make me laugh. His characters seem to live, or at least wish they could live, in their own worlds, obsessed with minutiae that doesn’t matter to anyone else. Rushmore is a wonderful early example to Anderson’s work, and a great piece of 90’s indie cinema, but it’s also a chance to see Murray in one of his best roles quirky roles.

See It If: you love 90’s teen quirkiness or outsider narratives, delightful and funny.