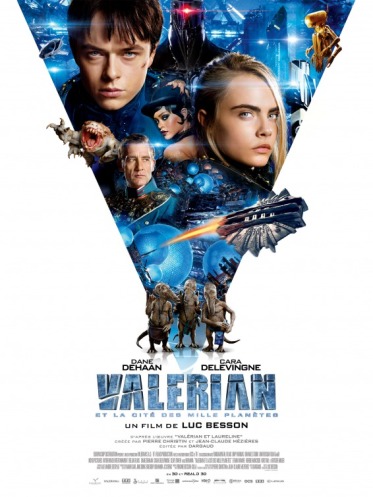 Valerian (DeHaan) and Laureline (Delevingne) are special operatives and partners in space, who may just have feelings for each other too. But before they can figure out their relationship, they have to figure out how to stop the threat to Alpha, a huge metropolis in space, and potentially save the world.

Their adventures take them through many places and dangerous situations in a race against time. On the whole the film is largely episodic with situations arising one after the other in a effort to show off the design of the world, the creatures on it, or to put the characters in danger with very little recourse to plausibility or narrative sense. This is largely compacted by the complete lack of charisma and chemistry between the two leads, and also by the odd and incongruous character motivations. It’s a strange film and one that is largely pointless.

But where it does shine is in it’s effects and world creation, and perhaps if you’re someone who likes sci fi you’ll get a kick of of this film for that reason. The set pieces and action are all quite nice, and the scenes with Rihanna are interesting from a cinematic perspective, even if they really have no meaning. It’s a shame that a film from Luc Besson, who made Leon and The Fifth Element, has so little heart and is so wooden. The budget is clearly huge in this film, and yet none of it really works.

See It If: you really like science fiction and alien worlds, there’s not much else to this film and it’s generally dull and disappointing.