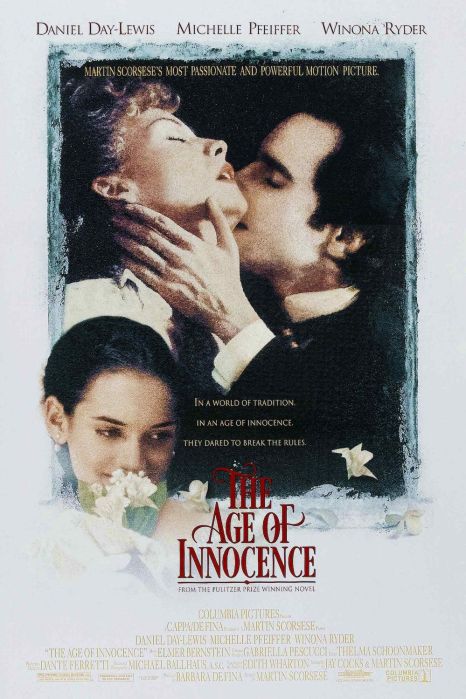 Sometimes it really blows my mind how diverse Martin Scorsese is as a director. From The Aviator to Taxi Driver and Raging Bull, he seems to be able to take on anything.

Here, he directs an Edith Wharton adaptation set in the upper echelons of New York’s elite in the nineteenth century. In a time when the the ruin of reputation was disastrous and status was everything, social rules were very strict. Newland Archer (Day-Lewis) is set to marry respectable May (Ryder) who is everything a young society woman should be. Then he meets her cousin, Ellen (Pfeiffer) who is both stunningly beautiful and sharp witted, and in the process of separating from her abusive husband. They soon start to fall in love, but with her being still married and him promised to her cousin, they can’t find a way to be together. Passions run high as Archer tries to speed up his marriage and his fiance suspects another woman might be the reason why.

All three in the triangle are beautifully realised characters. May is sweet, young and nice, where Ellen is richly beautiful, sensual, passionate and skewers the conventions of the society she finds herself in. Archer is a man of principle, and he tries to do the right thing morally and socially, but he is deeply in love with someone who is not his fiance. All of them are nice people, you like them, and that makes it all the harder to watch them breaking each others hearts and be pushed around by the social rules.

It feels like these kind of lavish period films were so popular in the 90’s, with their attention to historical detail and costume, as well as the exploration of passions simmering under the surface of outward social convention. I like the way this one covers a long period of time, from the meeting and early engagement of May and Archer, through the lives and fortunes of her family, to their marriage and the trials that Ellen must face as a woman tied to a cruel husband and an outcast from society for being a separated wife, all the way through to the eventual outcome of the whole story. It’s a touching film, there are some really lovable characters here, and you want them to be happy, but in this triangle, not everyone can be. The struggle between doing what’s right, what’s expected and what your heart longs for are all explored here, with a gentle voiceover guiding you through.

It’s a lovely film, from a masterful director, and it was lovely to sink into this one and enjoy the ball rooms and drawing rooms of the New York social set, the clothes, and of course, the romance.

See It If: you love old school costume drama and romance, this one is quite lavish and bittersweet.