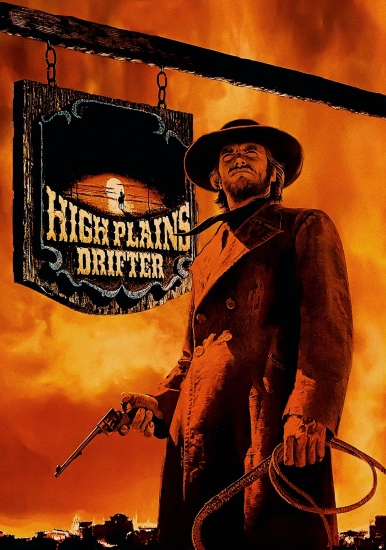 Clint Eastwood’s second film as director, following years of starring in spaghetti westerns, is a highly unusual twist on the genre.

Lagos is a town under siege. Three outlaws are about to be released from prison, and intend to return to the town to have their revenge on those who put them in jail. When a gun-slinging drifter rolls in to town, the townsfolk beg him to save them, and offer him carte blanc to do it. Sounds like fairly standard western plot, right?

Well, here’s the thing. The Stranger (Eastwood) is not exactly hero material, he rapes and seduces women, kills people in bar brawls, kicks everyone out of the hotel so he can have it all to himself, and orders the townsfolk to paint the entire town red before eventually setting fire to it.

And those innocent townsfolk are hardly so innocent as they make out they are. They’ve done something very bad that they don’t want anyone to find out about…

But they’re also mostly pretty weak and awful people, willing to stand by while bad things happen rather than stand up and fight. They willingly go along with the absurd orders of the Stranger and allow him to behave appallingly, because they need him and because they fear him.

But the best part of this film for me is the ending. Who is this Stranger? Why doesn’t he have a name? That last scene tells you everything, and I love it.

This film feels very 70’s from the acting style, the themes and the score, even the use of flashbacks, and I like that about it. Other westerns feel like westerns, this one feels like the same but different, slightly off, slightly jarring. Things aren’t what they seem. I also really like some of the wider, landscape shots which capture the beauty and loneliness of the country, something westerns do so well.

It’s a film that bends and changes the western genre, and shows the early genius of a director who is still making some really wonderful films today. It also shows how much America and the world was changing, challenging itself and skewering the falsity in some of it’s classic genres, refreshing them for a more cynical, less innocent audience.

See it If: a kind of dark, anti-western, this film is really entertaining and mysterious. Should amuse western lovers and western haters alike. It is a bit violent, though, no romance here.