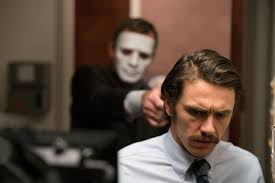 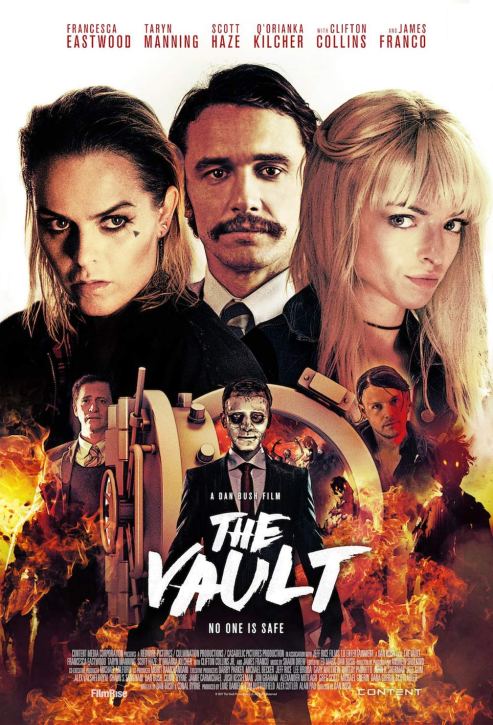 When their brother owes money to the wrong people, sisters Vee (Manning) and Leah (Eastwood) decide to help him rob a bank. But things start to get strange and unusual when they have to open the vault in the basement…

This film has an interesting premise, but often lags a little. It opens in the bank, as the robbery is set up, and soon the robbers realise that there’s not enough money in the bank upstairs, but that they can find their big bucks in the basement. But we also know that the banks basement is said to be haunted. What will evil will they unlock when they unlock The Vault?

This film has some odd family drama, where Leah and Vee seem to have some family aggression that feels like it was meant to be explored more fully but never is. They’re two unusual leads, but they do OK. Eastwood is the daughter of Clint, and I’d never seen her in anything before. I kind of liked her. And their brother seems to have a problem with money and some bad gangsters which could have been interesting to know a little more about.

It also isn’t a really fast film, and could have used the horror elements more and had a higher body count, but I think it was trying to be more of a mystery or thriller rather than just another straight horror, and I respect that.

So what’s in the vault? Well, I’ll say that it’s dark and ghoulish, and is more than one entity. This film has some interesting deaths and gore in it which are nicely handled, but it’s not overly gruesome just for the sake of it. It’s an interesting film that might not have enough action and scares for some of you, but has it’s small rewards all the same.

See It If: you like an interesting premise to your films, and not too much scares. It’s a horror thriller that leans towards thrills more than horror.