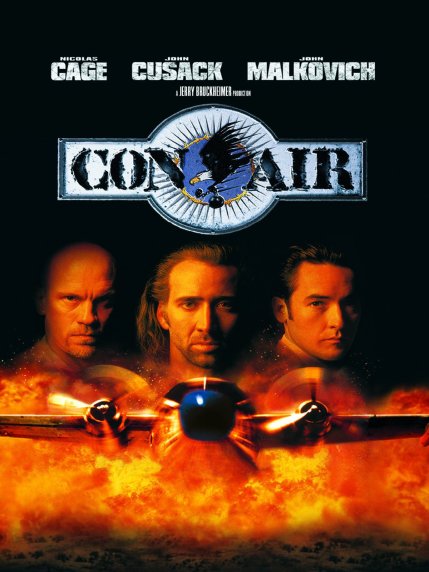 Cameron Poe (Cage) is a Us Ranger, but when he accidentally kills someone in a bar fight, he’s sent to prison, where he keeps his head down and thinks only of serving his time and getting back to his wife (Potter) and child. With his release up, he’s put on a plane to head home, and happens to find himself on a flight with the worst criminals, who just happen to have an escape attempt planned. When they take over the flight, he has to choose between doing what’s right and getting home.

Perhaps this film really needs no introduction. It’s one of those 90’s action films that where so crazy and so huge at the time that everyone has probably seen it, but it came up in conversation recently and I felt like it was time to rewatch it. And honestly, it’s a really wonderful, funny, violent and sometimes sweet action film, with some of the players at the top of their game.

It’s a star studded cast, and everyone seems to be having a really good time. Cyrus the Virus (Malcovich) is the leader of the plot, a psychopath who has some pretty good one liners and really chews up the scenery. But he’s joined by a cast of colourful bad guys who all get their little moment to shine. My personal favourite is Garland Greene (Buscemi) a serial killer who is so calm and has these little insightful comments. There’s a scene where he has a tea party with an unsuspecting little girl that’s truly chilling. On the side of the good guys is Vince Larkin (Cusak) who owns the Con Air plane, and really just wants his plane back, but is stymied a lot of the time by foolish bureaucracy who have ideas about how to get it back but are essentially just getting in the way.

It’s a film of great action sequences and tension, as Poe tries to help a friend who needs insulin, and to stop the bad guys without them finding out that he’s not actually on their side. And of course, it’s totally crazy too, with larger than life characters, the most 90’s moments you’ve seen in a long time, explosions and deaths. I love this film, and on rewatching it, I think I fell in love with it all over again. Right down to that final scene where he gets to give his daughter the stuffed bunny that he bought her in the prison gift shop that’s managed to make it with him through the entire trip.

See It If: this is classic 90’s action cheese, and most of you have probably already seen it. But it’s well worth a watch, just to see these guys having fun being bad.