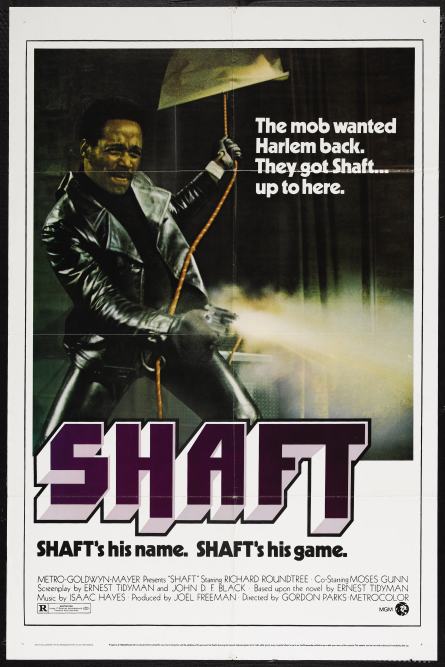 Credited as being the film that started the craze for 70’s blaxploitation films, Shaft is about a black private eye as cool as he is efficient.

John Shaft (Roundtree) is tasked with finding the kidnapped daughter of a black drug dealer, but soon finds that the culprits are the Italian mafia. Not only must he rescue her, but he finds himself hounded by two white cops who want him to give them information about a fomenting gang war in Harlem. Caught between a rock and a hard place, Shaft is always cool, calm and collected. And gets shit done.

It’s a wonderful film, with it’s cool protagonist and twisting plot, and it’s easy to miss how ground breaking and important this film was at the time. If you look at black characters in Hollywood cinema, going all the way back, you find slaves and servants, noble savages, and fearful, childlike figures. Or token figures, sidekicks… Shaft was something else entirely. He’s an action hero, someone that black and white audiences loved and could look up to. He’s never pushed around in this film, he’s not afraid to answer back, and he takes the lead and gets the job done. It’s quite an incredible film, and really entertaining.

And it led to many more films being made in this mold, including two Shaft sequels. And a recent Shaft remake as well as inspiring directors like Tarantino.

One thing I love about these films is the soundtrack. This one is by Isaac Hayes, and the title song has become kind of iconic and won an Oscar. It details the person of Shaft, a man who is a “sex machine” who “doesn’t take orders from anyone”. It’s so 70’s it’s kind of priceless.

Many films that are deemed culturally important feel like they have a message or are quite dour. This film just tells it like it is and has fun. It’s a classic for all the right reasons.

See It If: you’ve never seen 70’s blaxploitation, this is the place to start. Should please retro lovers, Tarantino fans, crime fans, lovers of black cinema… It’s a crowd pleaser.