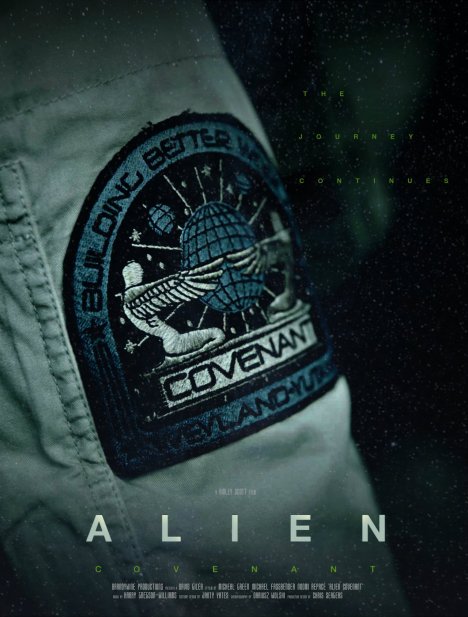 The crew of a pilgrim ship heading for a new world are woken by an accident 7 years from their destination, and the deaths of their crew make them wary of re-entering cryosleep. Enter a chance transmission from a habitable planet right nearby, which means they can settle here and now. But is it too good to be true?

As the crew investigate the transmission, two of their number fall ill with a strange parasite which bursts through their skin, and the only survivor on the planet seems to be a sinister android called David, a creature we met before in Prometheus.

It’s a strange film. In the timeline, it sits after Prometheus, which was a prequel to the Alien franchise. It tells more of the story of the evolution and creation of the alien xenomorph, and explores questions of creation and God, with a little less focus on pregnancy and those themes than earlier films. It does some original things with the aliens themselves, which is quite creative, and the design elements here are really impressive, with the effects, locations and spaceship looking really beautiful.

However, the film lacks any urgency overall, which is kind of central to a thriller. Partly, this is because a large amount of time is spent with Michael Fassbender as two different generations of synthetic human, the original David and a later version, Walter. The relatshionship between the two is oddly homoerotic, and perhaps incestuous, if you think about it. David is overplayed a bit as a creative and intellectual robot, a sociopath in the Hannibal mould. But with long screen time spent on him, he almost feels like a protagonist rather than the antagonist.

The crew of the ship Covenant, which gives the film it’s title, are all rather dull. They generally have one facial expression each, and there are a few too many of them for them all to get enough screen time for you to care what happens to them. Their deaths are wonderfully sudden and bloody, but there’s no real tension built around it. They generally make foolish emotional decisions, which for me made them feel disposable in the sense that they create the situations that lead to their deaths. The leader is a fool who spouts almost biblical quotes and has little spine, there’s a cowboy who talks about the crews tits and “heroically” makes idiotic decisions, and there’s Katherine Waterston as Daniels, who is a one note Ripley wannabe, without her natural grace and confidence. She’s fine, but we should have more of her if she’s our protagonist.

Generally, there are no real stakes for these people, not enough escalation and since we barely know them, no tension. It’s functional as a science fiction film, but it’s a less than average thriller. But for the 5th film in a series, it’s pretty much what you’d expect. I miss the old days of Alien and Aliens.

See It If: if you’re an Aliens Franchise fan. It doesn’t reach the thrilling heights of the first and second films so might not please those who aren’t devotees and just want a sci-fi survival horror.

If you’re interested, I have taken a look at the Aliens franchise as a whole, you can read it HERE.