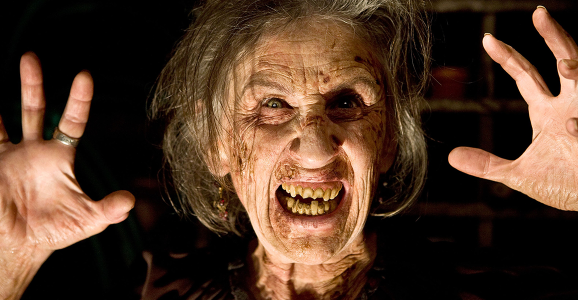 I’ve been having fun watching and writing about horror franchises, but I haven’t done a horror round up in a while. Here are five recent views that you horror lovers might love…

A young ambitious banker decides to refuse a gypsy woman a loan in order to impress her boss. Man, was that ever a bad idea! She’s cursed, with a demon after her and only three days to try anything she can to lift it. This film is pretty hilarious, but intentionally so. There’s plenty of gross out moments and some really creepy scares as death haunts our heroine, and a hilarious seance with a famously awkward talking goat. It’s fun stuff, and one for the horror fans, especially those of you who got a kick out of the Evil Dead, since this is a Sam Raimi film. I guess you know what to expect, and you certainly won’t be disappointed.

Mickey Rourke is Harry Angel, a private detective hired by a mysterious man who goes by the name Louis Cyphre played by Robert Di Niro. He is set on the trail of a musician called Johnny Favorite, as as he goes deeper down the rabbit hole, he enters a dark world of mystery and black magic. Perhaps more of a thriller in tone than a flat out horror story, I love the ending of this film and the twists and turns. And who doesn’t like a dark story with a bit of voodoo thrown in? A really good, creepy film starring two masterful actors.

A small horror film, this one has many of the usual tropes: troubled couple move into haunted house, plan to start over, she’s pregnant, their young son is rather odd, the local townspeople are hiding something… But it does some fun things with the genre. Brian Krause (that’s Leo from Charmed, for those of you who loved that show) stars as a doctor who starts to suspect that the local sheriff knows something about the nightmares his son is having, about the kidnapping of a local couples child from her bed, and about the evil, lurking figures just seen out of the corner of his eye… At it’s best, it does some great things with sleep paralysis that is majorly spooky, at worst, it leaves some important things unexplained. But all in all, it’s quite fun.

Kiefer Sutherland stars as a washed up detective who takes a job as night security in a burned out Art Deco department store. When he starts to see and hear things in the mirrors that spread throughout the store, he wonders if he’s losing his mind or if there is something very sinister going on at the Mayflower store. The sets are a delight in this film, full of interesting objects, beautiful design and creepy, half melted mannequins. But even better than this, the plot involves a decently plotted mystery at the heart of the tale that unfolds beautifully. A fun watch.

This follow up to the previous film uses the same basic concept, but feels like a different franchise. A young man is struggling to come to terms with his past when he takes a job as a night watchman at a branch of the Mayflower department store. He immediately starts to see strange things in the mirrors, and deaths start to pile up as people are brutally murdered by their reflections… It’s a cheaper film, relying on the gory deaths rather than good acting to carry the plot, but the central mystery is interesting, and the deaths are quite disgusting and creative. It’s a kind of cheap, fun follow up to the first film, but the central idea of why it’s happening is completely different.

17 thoughts on “Horror Movie Round Up: Gyspy Curses and Deals with the Devil”