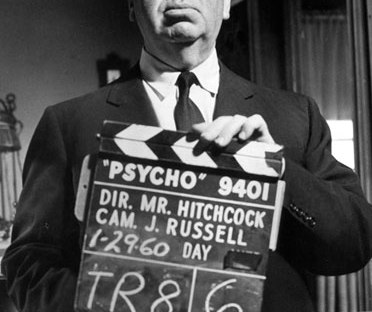 The name and face of Hitchcock in some ways have taken over the man, a deliberate choice on his part, it would seem. Director of famous thriller and crime films like The Birds, North By Northwest, Rear Window, and of course, Psycho, he’s a man that in many ways needs no introduction, but who, because of his fame and his iconic recognisability, is quite an unknown quantity.

Hitchcock and I share the same birthday, though almost 100 years apart. I’ve loved his films since I was a kid, watching the black and white thrillers like Rebecca and Strangers On A Train with my father, or Rear Window with my Grandmother. It’s hard to imagine now how much of an impact his films had at the time of release, when Hollywood was still running under the studio system and stars and directors did not have the power they do now.  Although his films were commercial, they were often unconventional, using aspects of European film making that were considered avant guarde, or pushing the boundaries of what censorship found acceptable, impacting what other film makers following him could do, though he had to often fight to get his own way. 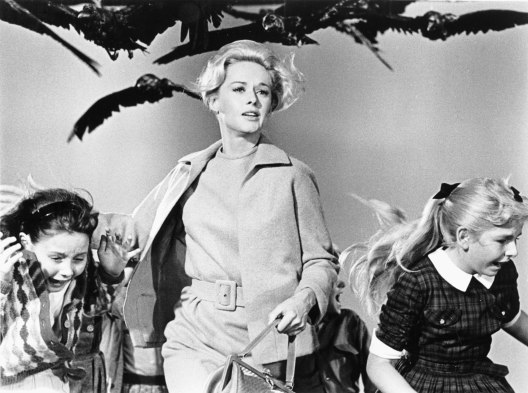 Born in London in 1899, Hitchcock started making films in the silent era, moving to sound gracefully when it became available. As his fame grew, he moved to California with his wife and daughter, and went on to greater and greater success there, though it wasn’t always easy. His wife, Alma Reville was his greatest support, and he always deferred to her opinion, because she knew her stuff, they had met on a film set.

Whilst Hitchcock cultivated the outward persona of a carefully put together British man, he had a ribald sense of humour and often played practical jokes on his cast and crew, some of which they didn’t find funny. His clothes were a uniform, he had several of the exact same suit, shoes, socks, etc. And he had a habit, it is said, of once a day tossing his used tea cup over a shoulder and smashing it, as a constant reminder of the fragility of life. As a director, he was not one to coddle his actors. His films were all planned out carefully in pre-production, so that shooting was always organised, and he hated actors asking him what their motivation was, and questions like that, rarely giving them advice or encouragement. He is quoted as calling actors “cattle” but that’s taken slightly out of context, it’s more that he rejected the pretensions of acting, and felt that a lot of the meaning of film was in the edit, script etc.

Hitchcock is also famous for being very hard on his leading ladies. He had a habit of taking a blonde as his lead, and then trying to shape her (much like the plot of Vertigo, a fact which was not lost on audiences). He would dictate her clothes, her mannerisms, her hair, who she could talk to and all the details of her life, both on and off set. He could be very cruel about this, and was reported as having promised to ruin Tippi Hedren’s career when she resisted. His leading ladies would often suffer from a physical toll, scratches and bruises from animals and repeated takes were to be expected. Why he behaved like this is something elusive, I haven’t found a good explanation in my reading, but it’s also interesting to note that Ackroyd in his biography points out that Hitchcock often joked about being celibate, and seems to hint at one point that his marriage might have been a lavender one (that is what they used to call in Hollywood a marriage between a gay man and a lesbian, to cover their homosexuality to the public). I’m not sure whether this is true, but he was certainly a man who was fascinated by women, and seemed to feel abandoned or rejected by them when they chose marriage or relationships over their careers (he is said to not have spoken to Ingrid Bergman or Grace Kelly after they left Hollywood for their partners).

Hitchcock made many films in his life, and was often more appreciated in France and Europe during his lifetime than in the US and the UK, though he was always popular, and had some huge successes. He appears in each of his films in front of the camera for a moment, often as an extra, being the first director to do this, and really created a brand around his name and persona, especially when a popular TV series was created using his name, Alfred Hitchcock Presents, which he would introduce, often with dark humour and some site gags. He was a man who was working on ideas right up until his very last years, and his body of work is impressive and although generally he chose thrillers and crime or mysteries as his genre, quite diverse and imaginative.

There are some great box sets on places like Amazon, if you want to sink your teeth into the masters work. I like Alfred Hitchcock – The Masterpiece Collection Blu Ray or Hitchcock 14 Disc Box Set DVD.

Of course, my list is not at all exhaustive. Leave a comment about your favourite Hitchcock fact or story, and tell me which of his films is your favourite. (I think mine might be Rear Window, but it’s so hard to choose!)

21 thoughts on “Biography Of The Month: Alfred Hitchcock”