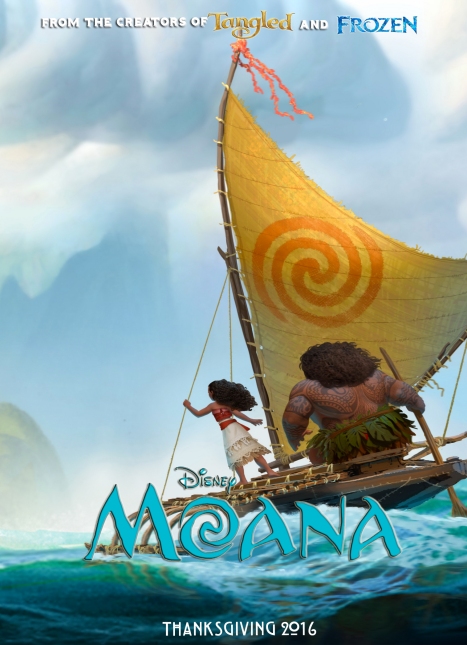 Moana (Cravalho) lives on a beautiful island in Ancient Polynesia where she is the daughter of the chief. But the demigod Maui has set a curse in motion that’s slowly killing the islands way of life, and the Ocean has called to her to break the curse by heading out on a dangerous journey to find him and set things right.

It’s a sweet film, full of heart and beautiful island and ocean vistas, and I loved the basis in myth and legend. It’s a beautiful story about returning the heart of the ocean, and taking on a huge burden to save the way of life that she loves. The banter between The Rock as demigod Maui and the other characters as he comes to terms with the damage he’s done and his vulnerability is nice. He has a moving tattoo that he argues with, which is a nice touch, too.

But the film is really Moana’s (Cavalho), who must break with tradition and through fears to save everyone and fulfil her destiny. She’s a cute character, and I really liked the way she was animated and her passion. Her little sidekick is a ditsy chicken, who is quite adorable and silly. And the songs in this film are quite catchy too.

I think that this one may not go down as one of Disney’s most loved classics, it doesn’t have quite as much to it as Little Mermaid or Frozen, but it’s an entertaining film. It’s received some criticism as being a bit forgettable but I had fun, and I think that kids will like it. I think Moana herself is pretty tough and sweet, and there’s some very good things here.

See It If: you’re a Disney fan or love animation, it’s a really cute film.