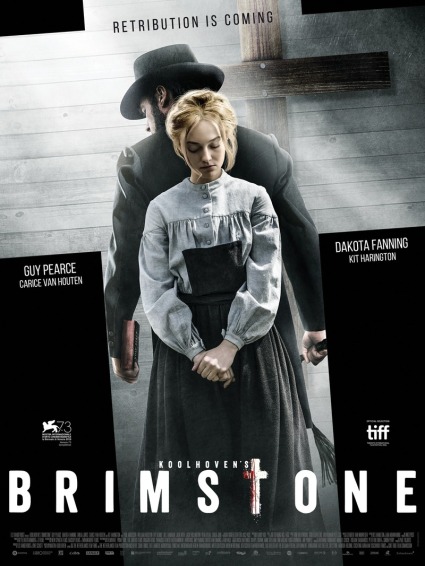 Wow… This film… Those of you who love the dramatic ridiculousness of Game Of Thrones will get a kick out of this, (it even stars two GOT alumni) but at heart, it’s dribble.

I want to say some good things about it, because this film has a good idea at it’s core, and because Guy Pearce is clearly having the time of his life playing the evil villian of the peice.

So what’s it about? Brimstone is set in I think the 1800’s, and is a film in four chapters, in which the game is set up, then we are taken back, back again, in an effort to explain more of the why of the whole thing, and then into the present. It’s the story of Liz (Fanning), a midwife in a small town who is mute, and aided in her work by her young daughter. She lives with her husband on a small holding, and he has a child from a previous relationship who seems to heartily dislike her. A new preacher comes to town, who Liz seems to know and fear very much, then a woman goes in labour and she’s unable to save the baby. The next thing she knows, all hell has broken loose, with the bereaved father calling her a witch, and the preacher seemingly egging him on.

Sounds cool right? Well, it all kind of falls apart after that. Though clearly afraid, her husband, who she is supposedly in love with, ignores her anxiety. Which seems weird to me. There’s never any exploration of her time with him, what their relationship is like, and more especially, how on earth she managed to become a midwife, which considering her previous employment, is a big question. When her husband is killed early in the film, his son does not suspect her. They’re suddenly on the same side.

The way the film spools back would work really well if the chapters had a lot to say, but they’re awkward and clunky. They would have been better served in simple flashbacks and the film would have been a lot less long winded. The logic in this film just isn’t there. It sets up the idea that Liz is going to to persecuted in the small town, but it’s actually a revenge film, in which she spends her time largely on the run. Pearce as the man who relentlessly pursues her has a way of surviving things that no one could survive, but he’s not supernatural, and his motivation is melodramatic and rather laughable in the end. Oh and the scene when Liz falls for an outlaw (Harington) even though they’ve had barely any interaction at all and none that suggests romantic feelings… I mean, the list of hole in this plot, you could drive your horse and wagon through.

Women are persecuted in this film in a way that they never would have been in the era depicted, which is meant to apparently mean that they’re strong and not victims, even while they’re raped, their tongues are cut out, they’re hanged, and beaten during sexual acts. (This film is pretty offensive to both genders, men are all predators, women are all victims). In one scene, a woman is made to wear a Scold’s Bridle, a punishment device that women were forced to wear if they scolded their husbands or talked back to them, but this was used in Britain in the 1600’s, I’ve never heard that it was used in America, though if any of you know that it was, let me know. I’ve never heard of it being used so late in history, but hey, it’s shoe horned in there too. So is a plot of incest, so be prepared for that one too.

Anyway, there’s the seeds of a great film in here. Fanning is wonderful, even if the plot she’s given is completely self-indulgent and ridiculous, and Guy Pearce is so great as the bad guy. The landscape and the attention to detail are captured beautifully, it’s shot like a decadent western, though it doesn’t strictly fit the genre. It would have been great if the menace of the preacher coming had played out in the small town, with people turning against her, and the audience not knowing what to believe, which is kind of how the film has been sold in it’s marketing, but it’s really just an extended episode of Game Of Thrones, with slightly more stupid and tenuous plotting, which only gets worse as the film advances. Entertaining to some, pointlessly violent, unrealistic and sad to others.

See It If: you’re comfortable with violence, and sexual violence, because there’s plenty of that here. You don’t mind lack of realism and anachronism. Watch it for Guy Pearce, but overall, it’s rather a silly film.